Are people not as friendly as they were? Are they losing sight of their priorities? It’s a good question that Britain’s small population of imaginary bears want answered. Last year it was Paddington Brown advocating for migrants. Now the original bear of little brain, Winnie the Pooh, has joined him in the real world — tattered, beaten and dusty — employing his own sedate philosophy to spread the goodwill and find a lost Christopher Robin (Ewan McGregor), who is now not the brave young boy he remembers.

It’s always a sunny day when Christopher Robin comes to play, but those days have long gone. Since those rose-tinted times in Hundred Acre Wood with Tigger, Eeyore, Piglet and co, Christopher has grown up and been called away. He has married his sweetheart Evelyn (Hayley Atwell), had a daughter (Bronte Carmichael), gone to war and watched the world be enveloped in a grey post-traumatic haze. He simply feels a need to put himself to work and move on. Childish indulgence, after all, will never amount to the reward of hard work. So says the joyless man working overtime to appease his exploitative boss (Mark Gatiss) at a luggage company while neglecting his family. The fact is he is lost, blind to the things most important. But then his friends at Hundred Acre Wood are similarly lost without him, so perhaps together they can reach a solution to all their problems.

Director Marc Forster‘s surprisingly unhurried and earthy approach to this British storybook icon has little aesthetically in common with the rich reds and yellows of previous Disney adaptations, but you can’t say it isn’t faithful to the characters’ docile existence. Where Paddington rides headlong into the world and all its dangers, Pooh has always been the product of a certain need to get away from them, more suited to sitting and pondering. His is the type of whimsical philosophy that, like any decent horoscope, at first seems vague and nonsensical and only becomes profound with the benefit of hindsight. For there is always room for hindsight, because they have all the time in the world to think about it. But having slumbered for so long since Christopher Robin last visited, Pooh and friends are no longer so animated; they are now merely toys, forgotten relics consigned to memory. 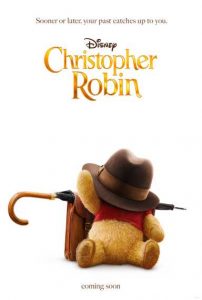 This is a darker world than A.A. Milne imagined for his son, but it is also one of the film’s strengths as it neatly complements last year’s Goodbye Christopher Robin, which detailed how A.A. Milne’s son, on whom Christopher Robin was based, came to resent his alter-ego. Christopher Robin, as imagined by screenwriter Alex Ross Perry, draws some stark parallels between the lives of Christopher Robins both fictional and real, with both Robins apparently having turned away from Pooh and reported for duty in World War II. Varying motives aside, perhaps Perry recognised the struggle the real Christopher Robin Milne had in forgiving the Winnie-the-Pooh franchise for its hold on his identity and thought it a pity that such good old friends should hold a grudge. This film strikes a reconciliatory note in that feud between an older dismissive Robin and a neglected Hundred Acre Wood, as if to remind Christopher to stop running once in a while and embrace quiet contentment.

After all, according to Pooh, ‘Doing nothing can often lead to the very best kind of something’, and it seems inevitable that, with Pooh’s counsel, what is faded will soon recover the joy of summers past.

It’s a sentiment that ultimately doesn’t entirely hold up throughout the film, as Forster has some difficulty in squaring the value of doing nothing with the requirement that Christopher at least do something. But even so, Forster does more than enough to deliver an enjoyable, poignant and above all faithful return of a beloved bear (thankfully voiced again with soft-spoken wisdom, as he has been since the 80s, by Jim Cummings). That is, don’t expect Pooh to be leaping from branches or launching into song-and-dance numbers as other animated fairy-tale revivals have been known to do. He is still the slow-witted honey addict but one who is, most importantly, a sincere and loyal friend. And in a world where friendship can often be lost in the swampland of working life and cyberspace, that is as fine an example as any.

Christopher Robin is in cinemas from 13th September through Disney.