The hills are alive with the sound of demon nuns and shitty dialogue in The Nun, the next instalment (or technically the first, chronologically) in The Conjuring franchise. After the creepy AF nun showed up in The Conjuring 2, the bitch is back.

Sister Irene (Taissa Farmiga), a novice yet to take her final vows, accompanies Father Burke (Demián Bichir), a priest sent from the Vatican, to investigate the death of a nun in Romania. While it appears the nun’s death was a suicide, something far more sinister appears to lurk at the monastery.

There’s not much more to it than that, and a weird demon nun that is never satisfactorily explained. Having not seen any of the other four films in The Conjuring universe, this reviewer was a little confused by an initial blink-and-you’ll-miss-it scene starring Vera Farmiga and Patrick Wilson, who don’t appear again until just before the closing credits – with these scenes merely there to link the film to the others. That Taissa Farmiga is Vera Farmiga’s real-life sister but that their characters share no relation was therefore confusing to say the least. 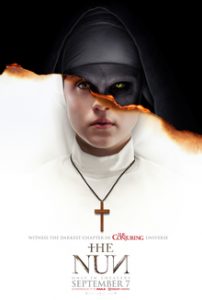 Hats (habits?) off to Taissa, however, in delivering a fine performance in an otherwise fairly woeful excuse for a film. She grabs your attention from her first scene which is actually quite reminiscent of Maria’s interactions with the Von Trapp children in The Sound of Music (except for the fact they’re discussing dinosaurs here). Oscar nominee Demián Bichir should surely get better film offers than this, and while he’s perfectly satisfactory here, there’s little reason to care for his character. Jonas Bloquet makes up the main cast as a local villager, Frenchie, who acts as little more than eye-candy and someone to flirt with the woman who’s about to take a vow of life-long chastity.

So is it scary? No. There are unsurprisingly a few jump scares, but they’re really pretty stupid for the most part and consist almost exclusively of a nun suddenly appearing and lunging at someone. The possessed nun looks like some CGI’d hideosity but it turns out it’s just a hella weird looking actress (Bonnie Aarons), which in a way just makes it worse.

That one of the writers, Gary Dauberman, is one of the co-writers of 2017’s It (one of my favourite films of last year) is surprising, because the writing is just plain bad. Then again, this is an original screenplay and doesn’t have the masterful Stephen King behind it. The script is cringeworthy and worst of all, flat out boring in parts. Dauberman’s co-writer, James Wan, who has written almost exclusively crappy horror (and directed both Conjuring films), does no favours for himself either. Corin Hardy, in just his second directorial feature, also has a long way to go. Someone being knocked back into an open grave should be frightening, not akin to watching someone trip over a step. The biggest problem with the film is its awkward tendency to include humour – at times intentional, but often seemingly not – in a supernatural horror. And not in a hilarious Skyscraper kind of way that makes watching the film a whole lot of fun, but in a manner that makes it feel completely out of place.

So how do you solve a problem like a crappy franchise that won’t die? Don’t waste your money on it. The Nun 2 is pretty much inevitable, but there’s some genuinely good horror getting released these days that deserves your cash more.

The Nun is in cinemas from 6th September through Roadshow Films.