Real and unexaggerated ‘Rags to Riches’ tales are a very rare find, so to come across one that not only happened in rural Australia but is also centred around a very entertaining man and his equally memorable confidants is a true find indeed. Australian director Jeremy Sims has found such a tale for Wayne and crafted it into the best sports documentary in years.

Wayne Gardner is a name that anyone who follows motorsport will be familiar with, but before he became a legend on two wheels he was a smart-arse kid in Wollongong. He was a working class boy who dropped out of school at sixteen and worked as a fitter and turner for the remainder of his teens. After buying a broken down bike for $5 off a wrecking yard and spending his afternoons tinkering with it his passion for speed on two wheels was born. From the age of eighteen he’s been eating up the bitumen in professional motorbike racing, going as far as becoming one of the “Gladiators on wheels”, those brave souls that race in the 500cc Grand Prix.

Sporting documentaries follow a familiar formula: interviews with family members (especially from Donna Forbes, Gardner’s now ex-wife), team mates remembering stories, and a trawl through a lot of archival footage – which here includes some spectacular crashes – but Sims has taken this formula and honed it to a razor sharp finish. From the ‘burbs of Wollongong to Philip Island to Monte Carlo, this is a journey full of entertaining people and great stories. 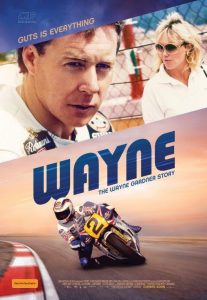 Front and centre is Gardner himself, who fits into the stereotype of an Aussie larrikin like a hand fits a glove. He’s charming, funny and eloquent; a casting agent couldn’t have picked a better man to lead this story. His rivalry with fellow racer Eddie Lawson is a Rush style biopic waiting to happen. In a laugh out loud funny scene Gardner returns to Wollongong in 1987 after winning the world championship as a national hero with a massive parade thrown in his honour, with seemingly every resident of the ‘Gong turning out with adulation. Lawson, clearly still slightly miffed after all these years, summed up the sentiment with “His city threw him a parade, mine gave me a parking ticket”.

Special interest documentaries, like ones about motorsport, rarely break out of their intended niche but when they do it’s often to great results – the gold standard being 2010’s Senna, one of the most involving documentaries ever made. Other times it doesn’t go so well, like with last year’s dreadfully boring McLaren. Wayne is in the upper echelon of this kind of documentary. Even those who dismiss motor racing as a bunch of adrenaline junkies driving in circles would be hard pressed to not have a good time, especially in the final thirty minutes as Gardner returns to Australia for his last hurrah at Philip Island which becomes an edge of your seat thrill.

Any motor racing fan will be delighted to have this endearing man brought to the screen with such skill, and those who haven’t heard of Wayne Gardner – like this reviewer hadn’t –  will find a funny, charming and genuinely exciting look into one of the greatest riders this country has ever produced. Australians love a sporting hero and you’re unlikely to find a better documentary about one.

Wayne is in cinemas from 6th September through Transmission Films.

Written By
Simon Storey
More from Simon Storey
The soul of the 1980s slasher is imbibed in Matthew Williams’ Maniac...
Read More