Nick Hornby’s novels seem to be written for film adaptation. While the novels themselves are generally good in their own right, the films are also pretty solid. The stand-out is High Fidelity, with John Cusack bringing himself straight out of the 80s, dusting himself off, and getting back in the game with aplomb. Now comes Juliet, Naked. With Ethan Hawke, Rose Byrne and Chris O’Dowd taking up the reins, this is a truly charming film.

Rose Byrne stars as Annie, the long suffering girlfriend of Duncan (O’Dowd). Duncan has an obsession with an obscure and enigmatic American singer-songwriter, Tucker Crowe (Hawke), who only released one album and who has since disappeared. When a second Tucker Crowe album surfaces – a collection of unreleased demos – Duncan is thrilled, but Annie is unimpressed. After years of putting up with Duncan’s fixation, she is sick to death of ‘Tucker Bloody Crowe’. She writes a scathing review of the album on Duncan’s fan site, eventually causing the couple to break up.

Although Duncan is mortified by Annie’s harsh position, the review draws support from an unlikely ally; Tucker Crowe himself. Annie and Tucker spark up a friendship over email, sharing their troubles, making odd confessions.   Soon enough Tucker is heading to the UK, his young son in tow, with the hope of meeting Annie in person. 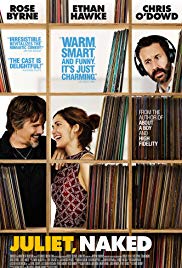 Directed by Jesse Peretz, Juliet, Naked is funny and warm; in many ways it is exactly what a lazy romantic comedy should be. It has just enough tension to keep from being twee, but not so much as to be off putting. Annie, Duncan and Tucker are well written characters, and the acting team do each one of them justice. Honourable mention goes to Lily Brazier who is excellent as Annie’s sister Ros, and who balances out Annie’s neuroses perfectly.

A small criticism is that there are several underdeveloped characters – Tucker’s children. There are a few of them, and they appear for various reasons (along with their mother). The Tucker Crowe back story is sorely under written, and so are the characters in it. This could be a result of adaptation from novel to screen, or simply an effort to centralise Annie’s story. Either way, there is a lot of humour to be derived from Tucker’s situation and this is not exploited fully.

Juliet, Naked has all the Nick Hornby trademarks; the killer soundtrack, the infantile ‘man-child’ (or several of them), the smart and patient female protagonist. Perhaps unwittingly, Hornby is starting to edge his way firmly into rom-com territory. He may well have become a staple.

Juliet, Naked is in cinemas from 6th September through Roadshow Films.

Written By
Amy Taylor
More from Amy Taylor
The original release of 54 (1998) wasn’t actually all that memorable. Lots...
Read More