The Happytime Murders takes inspiration from these earlier successes and threatens to one-up them all by being associated with the Henson brand, the most revered name in puppetry. But Jim would be rolling in his grave at his son Brian’s creation, which never quite gets over its own punchline.

The Happytime Murders, directed and produced by Brian Henson, is a parody of every Los Angeles crime drama you’ve ever seen, except that half the characters are puppets. The story follows Phil Philips (Bill Barretta), a puppet private investigator trying to solve a killing spree that’s taking out the puppet cast of “The Happytime Gang”, one by one.

The fact that they’re all puppets is the film’s solitary gimmick and it labours this point until we’ve heard every fluff-related innuendo writer Todd Berger can concoct, which aren’t particularly funny the first time they’re said. There’s definitely an audience for this type of D-grade crass humour, but with so much of the gags relying on us being supposedly shocked about puppets being obscene, the film’s comedy fails to sustain. 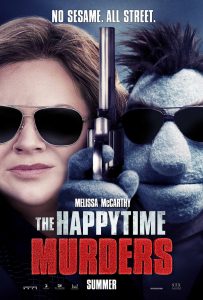 When the puppets aren’t swearing, smoking or engaged in lewd sex acts, they’re being blown to bits. The gag here is that a pulverised puppet is not graphic by any stretch, however this does strip the film of any suspense, which is one of the best aspects of the films The Happytime Murders is trying to mimic.

With that said, probably the film’s greatest strength is its story, which despite being filled with predictable tropes and gratuitous puppet obscenities is engaging to follow. It’s a fun whodunit that fits together very nicely without complicated twists or glaring plot holes, and even if you’re one step ahead of the action it’s still enjoyable to follow along.

Philips is the most likeable of the characters; his authoritative DeNiro detective voice, no-nonsense attitude, and cynical outlook make him stand out from his absurd puppet contemporaries, all of whom are little more than caricatures. In the streets of Los Angeles, there are no endearing puppets like those found on Sesame Street or in The Muppets cast – most of the puppets here are drugged up, misogynistic losers.

Detective Connie Edwards (Melissa McCarthy) is a good match for Philip’s cynicism and their pair has pretty good chemistry considering she’s the only one with a heartbeat. Unfortunately their banter-heavy duo is let down by inconsistent scripting, which sees the pair regularly swapping between being straight and funny. Although this makes for a few good gags, it ultimately compromises the reliability of each character.

There are moments when The Happytime Murders promises to be something more than a foul-mouthed teen flick, but these are few and far between. In the film’s opening monologue, we learn that prejudice against puppets is a societal issue, which naturally brings present day race issues in the United States to front of mind. But this mention is seldom explored and remains little more than a topical gag.

It’s perhaps unfair to ask too much of a film that doesn’t want to take itself seriously, but the end result is a film that fails to subvert any expectations, which is what other works of anthropomorphic comedy have achieved so well. Compared to them, The Happytime Murders feels rather stale, lacking the biting satire of Sausage Party and the heart of franchises like The Muppets. At best, the film adds a new dimension to the tired cop genre, but fails to be much more than “Detective Film… with Puppets!”

The Happytime Murders is in cinemas from 23rd August through Roadshow Films.