With Summer coming to an end (in the tinsel town hemisphere at least) what better time than now to release an audacious beach blockbuster? The Meg pits the fiercest, nastiest, most awe-inducing creature known to history – Jason Statham against some ancient shark, the megalodon. It should be egregious fun. Egregious having two definitions – outstandingly bad or remarkably good.

Jason Statham is Jonas Taylor, the world’s greatest deep- sea rescue diver. The film opens a few years prior and Statham is on a mission in the Philippines to save a crew within a sunken ship. With only some of the crew saved, Statham sensing danger abandons the mission, getting his rescue sub away with seconds to spare as the ship is destroyed by a mysterious force.

Up on the surface everyone is all like “why couldn’t you save the rest of the crew Statham? You’re supposed to be the best”. Statham’s answer to this is – “It’s about who lives. Not who dies. Some of the crew who died down there were my friends. By the way I saw a monster. Now I’m going to go deal with my PTSD by becoming a casual alcoholic in Thailand for a few years and give up diving”. That’s not verbatim but close enough.

Cut to present time, and a billion dollar plus research facility has discovered that the bottom of the Mariana Trench is actually a layer of hydrogen sulphide, and there is a deeper and more prehistoric layer underneath. Entering that world in a submarine is a team of two stereotyped nerds (Masi Oka and Olafur Olafsson) and one stereotyped hot blonde (Jessica McNamee). After the same mysterious force disables their sub and communication to the facility, head researcher Zhang (Winston Chao) decides to drag the best rescue diver out of retirement. Statham is all like “thanks for taking the helicopter over here but the answer is no, you want a beer or not?” “But Statham”, they reply. “The hot blonde down there. It turns out that’s your ex-wife”. 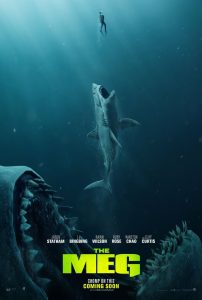 From here on out you can probably guess most of the plot. The Meg escapes into the open ocean, some whales get eaten. Statham and the big shark face off a few times and the head researcher Zhang has a daughter Suyin (Bingbing Li) who falls for Statham. The biggest surprise here is Suyin’s character is surprisingly capable and written as more than just the hero’s trophy.

As much fun as it is to dissect the plot there are other elements of the film to discuss. This is a disappointingly blood and death free shark film. A large pair of scissors have been taken into the cutting room to get this down to PG13. Director Jon Turteltaub and Statham have both diplomatically spoken of a different envisioned product than the one that has hit theatres. Reading between the lines this was an action horror film meant to be taken seriously and instead we have an action with no guts or horror but plenty of cheese.

It’s a film pulled in two different directions. On a binary of taking the successful source material of author Steve Alton seriously and hamming things up to the ridiculous level of Mega Shark vs Giant Octopus we’re stuck in no man’s land where a ridiculous plot and dialogue are expected to be taken seriously. The scientific name of the ‘megalodon’ means ‘big tooth’. The producers saw big dollars, and unfortunately a hugely terrifying and entertaining creature ends up with a big muzzle. In spite of all this it still ends up entertaining at times mostly thanks to the cheesy dialogue, ridiculous action and Statham having a blast with the borderline parody.

Viewing the film is a lot like having a hook up buddy. You walk in with no pretence, you know what you’re doing there. Let’s not talk about it and ruin things. Just get ready for two hours of shallow and unfulfilling enjoyment and try not to feel guilty about it later. At least it’s with Jason Statham.

The Meg is in cinemas from 16th August through Roadshow Films.

Written By
Ben Isbel
More from Ben Isbel
To summarise Moonlight in one word - visceral. It would also be...
Read More