Updating a classic of the Blaxplitation genre in the political climate of 2018 is a ballsy move. Superfly, released in 1972, remains one of the cornerstones of the genre as one of the most profitable and popular films to come out of the movement. Updated to accommodate the black culture of today, the 2018 version of Superfly supports a soundtrack packed with rap stars, including Future who was a producer, and is brought to life by a music video director who goes by the name “Director X”.

In the mean streets of Atlanta, the epicentre of black culture in American today, a turf war is brewing. Priest (Trevor Jackson) is a mid-level drug dealer renowned in the hustling game as being a man not to be fucked with. As a rival gang, lead by rapper Big Bank Black, get increasingly violent and with the Mexican cartels getting further into the melting pot, Priest decides it’s time to pick up and move out, on the very sound reasoning that “power never stopped a bullet”. As threats gather from all sides it’s not clear who’s worse: rival gangs, the cartel or the racist cops who want in on the game.

Halfway between a knowingly ridiculous send up of its own premise and a straight faced dive into the the shady world of gangster rappers, Superfly comes off like a morally reprehensible music video that’s been stretched to a length of two hours. ‘Guilty pleasure’ is an overused phrase, but it was made for films like this.

Trashy cinema like this is not for everyone but in the right environment it earns its place. Subtlety and social commentary rarely factor into the film’s to do list. This is the kind of movie where characters have ‘THUG LIFE’ tattooed across their foreheads and the N-word is used like punctuation. A world where gangsters wear sunglasses in the middle of the night and the few women characters often wear nothing at all. This is all about the big guns, the drugs, the obscenely expensive cars and fat stacks of cash – which in many scenes is made to rain over gyrating bottoms as the flashy camera work leers over proceedings with all the grace of a teenage boy who just found a porn magazine behind a hedge. 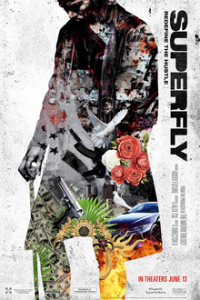 The comparison to a music video – and with an original soundtrack by Future it certainly feels like a music video at times – is both everything that’s right and wrong here. Camera work and editing has a great rhythm; at no point is the film boring, and the screenplay by Alex Tse, although convoluted, occasionally hints at a depth not often seen in the exploitation genre.

On the flip side: no one, no matter how hard they tried, could excuse the way the film portrays women. Yet if you’re making a film set in the world of rap music and gangsters it would be dishonest to show anything different. Depiction is not endorsement, but when reproducing a culture as unapologetically sexist as rap music it would be hard to make a film that doesn’t slip into the many pitfalls around this issue.

Trevor Jackson has a great presence on screen and holds the many tangents together but other than that there are few memorable characters in this uneven film, apart from Renee Victor who only appears in two scenes as the matriarch of a Mexican cartel family who threatens to steal the entire film with one of the most badass bitches of 2018.

This is absolute, unapologetic schlock. Laughably bad with emphasis on the ‘laughably’. Yet the script is tight, it knows exactly what it’s trying to be and if you’re in the right mood for it, this brand of schlock can be a lot of fun. See it in a packed cinema or invite some friends around for a few drinks and laugh the night away. Cult following and midnight screenings will ensue.

Superfly is in cinemas from 9th August through Sony Pictures.

Written By
Simon Storey
More from Simon Storey
The current fascination with American race relations continues like never before in...
Read More