Roger Moore had his time to shine, and we’ve had our fair share of Bond films over the years. Now it’s the ladies’ turn. It doesn’t take a genius to recognise the nod of the film’s title; it’s just a shame that instead of turning convention on its head, The Spy Who Dumped Me is a rather bland effort.

Audrey (Mila Kunis) has been dumped. Her boyfriend of one year, Drew (Justin Theroux), appears to have taken the coward’s way out: dumping by text and subsequently becoming unreachable. Audrey’s best friend Morgan (Kate McKinnon) suggests the obvious: burn his shit. Soon after, Audrey is approached by Sebastian (Sam Heughan) and Duffer (Hasan Minhaj) who claim they work for the CIA and that they’re looking for Drew, a spy. Upon sharing this with Morgan, shit gets real, Drew’s dead, Morgan’s killed somebody, and the BFFs are on their way to Vienna to deliver a package. As you do because EUROTRIP! 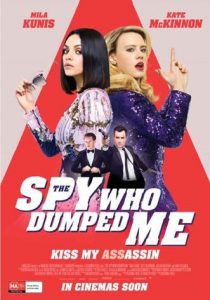 What follows is a game of cat and mouse featuring lots of people getting killed, no one knowing who to trust, a crazed gymnast turned assassin, Australian backpacker stereotypes, lots of Mila Kunis screaming and Kate McKinnon holding up plot progression in order to milk laughs, and a bit of romance. Unfortunately no cool gadgets, just disguises by way of hair dye and nothing else.

Obviously as a comedy the two female leads aren’t supposed to be any good at the spy game. The jokes revolve around their lack of experience and their few good decisions in the midst of a crisis, such as the best part of the body to hide a USB stick. It’s not NOT funny, but it’s not especially uproarious either, with writers Susanna Fogel (who also directs) and David Iserson struggling to live up to the superior Spy. Kate McKinnon is always good value, and the few laugh-out-loud moments usually come from her. But her bits do tend to go on a bit, sometimes past the point where they need to. Mila Kunis is often likeable but here she’s just annoying. In her defense this is a better film choice than Jupiter Ascending.

At two hours, the film goes on much longer than it should. It isn’t dull but it’s never particularly exciting either, even with all the car chases, torture scenes, mutilated bodies and vagina jokes. Yay for girl power and friendship and all that but we can match Bond with greater flair than this.

The Spy Who Dumped Me is in cinemas from 9th August through Roadshow Films.