The first Mission Impossible was a forgettable film, but there’s a part that stuck in the cultural memory and set the series on its way: Tom Cruise lowering himself down on zip wires to stop inches above a vault floor. It stands out because the movie was designed around the action sequences, with story hung around them. Ever since then, the series has always been a stunt spectacular first, and a narrative driven movie second. It’s been a showcase for the skills of great action directors like John Woo, Brad Bird and now, surely confirming his status as one of the most skilled action directors working, Christopher McQuarrie. Most of all though, it’s the Cruise show. No matter what other action movies he’s in, his best always seems to come out when he’s working on an impossible mission.

Cruise and McQuarrie’s second series outing as actor and director (the pair have worked together seven times in some capacity) is Mission Impossible: Fallout. Let’s state the obvious first – this movie is ludicrous. Like laugh at its audacity to tick off every seemingly obvious plot point, lean into every series set piece cliche you’ve ever seen, ‘here we go again’, ridiculous.

Yes there’ll be a fight in a fancy party, yes they’ll jump out of a plane, and yes of course there’ll be plutonium, and a worldwide terrorist network, and the potential end of the world, and car chases, and bike chases, and face-swapping, and double-crosses, and triple-crosses, and convoy attacks, and countdowns, and hanging off helicopters and cliff faces, and Hunt going rogue, and, of course, Cruise running, running, running. Are you here for the story? No, it’s momentum and flow that matter to this movie. 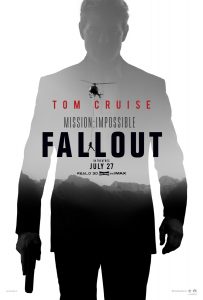 It knows exactly what it is, what you’ll expect, and what’s come before. Which is why sometimes it can pull of its own mask to hit you in the face, spin you 180 and say ‘Ha, thought you knew what was going to happen. Nope – we’re smarter than you’. It leaves the audience laughing at being got. It’s Cruise’s character Ethan Hunt if it were a movie – it’s smug but not in an alienating way. It has total belief in itself. It knows what it’s good at and it does it damn well. Throughout the movie, almost like it’s his mantra, Hunt says “I’ll figure it out”. It’s what you can hear Cruise saying when the production asks why helicopters would be sliding down a cliff face or why he’s running across building tops again.

There are few directors working out there now who are setting up and executing their action set pieces quite as well as McQuarrie. His scenes flow with a visceral, grounding realism even at their most absurd developments. You can feel the hits and the crashes. Single bullets and knife thrusts are deadly. There’s a pure kineticism to a bike chase through the streets of Paris or a brutal fight in a bathroom. The recruitment of Henry Cavill as agent Wallace – unleashed by Angela Bassett’s (criminally underused) CIA director and tasked with watching over Hunt and his team to make sure everything works out in her interests – is a boon to this. Here’s an actor that’s not just got the physical tools made for breaking bones and throwing people through things, he’s also finally showing as much personality as he is muscle. He’s like an embodiment of this movie – ridiculousness made real. A ridiculous specimen of a human who can make a greater impression grounded in the real world than in some tactile-less CGI superhero-fest. (Give me a series based around Cavill and Bassett anyday).

Some might say equally ridiculous is the lengths to which the film goes out of its way to make Cruise’s character seem like an incredibly good person. Obviously the intent is to subconsciously associate Cruise himself with that, but it’s actually refreshing to have a movie hero whose struggle is actually to be good and stay good. One to whom a single life matters as much as the big picture. On the other side, the villains are one dimensional figures who make boring, verbose pronouncements that only serve to flatten them. But that’s part of the movie’s whole deal. Like Hunt himself, it doesn’t really care why they want to kill and destroy; reasons are just the boring bits between the fun.

Mission Impossible: Fallout is a movie that gleefully accepts the cliches of its predecessors and delights in subverting them. It’s the kind of movie that makes you want to bring out your own cliches and refer to it as things like a ‘high-octane action thriller’ or ‘white-knuckle rollercoaster’. It’s by no means perfect, but you just can’t deny its pure big-screen power.

Mission Impossible: Fallout is in cinemas from 2nd August through Paramount Pictures.

Written By
David Nagle
More from David Nagle
Few people might think documents are exciting, and fewer still that a...
Read More