Almost a century ago, highly influential French literary and theatrical figures Lous Jouvert and Jules Romains debuted the satirical play Knock ou le Triomphe de la médecine. Its popularity led them to later make two film adaptations, one in the 30s and one in the 50s. Jouvert – as the titular manipulative, irresistibly persuasive doctor – gave a commanding performance that made the film a classic of French comedy.

It’s against this storied history that writer and director Lorraine Lévy brings us her remake, Dr. Knock. This new version follows the original story, but makes a few notable changes. Set in the 1950s, Knock is now played by Omar Sy, the French-West African actor who rocketed to fame with his performance in the supremely successful The Intouchables. We first meet our Knock as he’s beaten in the sewers under Marseille by men he owes money to. In order to escape his debts, Knock talks his way into a position as a doctor on a ship headed to India. He’s certainly no doctor, but he’s the only candidate. His charm, and a flair for persuasion and improvisation in this new position of authority, quickly has him separating people from their money. Seeing the potential in this career, he soon decides to enrol in medical school. 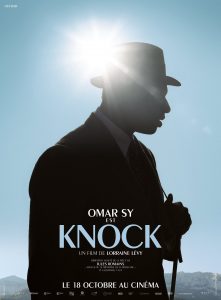 Five years later, Knock takes over a small practice in the country town of Saint-Maurice. The previous doctor has left for Lyon as the town’s residents all seem to be in perfect health, and neither he nor the pharmacist had any visits. Knock’s natural instincts take over once he realises the wealth of the populace, and his strength of personality soon has the town queuing up to see him and being prescribed a variety of expensive treatments. But his past and the jealousies of the local priest soon threaten to expose where his interest truly lies.

Like the treatments prescribed by its central character, Dr Knock might leave you feeling mildly content without any bad side effects (apart from parting you from your money). But unfortunately there aren’t exactly any benefits either. Like Knock’s examinations, it’s all just surface level. The way the narrative progresses undermines any kind of satirical bite the story might have had, and its running time is bogged down by a love story that really feels as tacked on as it truly is. While some of the performers are clearly enjoying themselves, the town folk are pure caricatures, and really we know as little about them as Knock himself. It’s hard to invest in such shallowly developed characters. Sy is a natural choice for such a charismatic role, one who changes opinions and circumstances by sheer force of personality, and he carries much of the film. But his character is all over the place – egotistical, manipulative, but also somehow the world’s most honest and transparent conman, one that the people willingly yield to. It means that the film lacks a darkly comic edge, instead relying on some poor slapstick and ineffective running jokes, and searches for an optimism that doesn’t suit the story. It lacks the momentum that a farce really needs, any energy coming from Cyrille Aufort’s score.

The idyllic, idealised French locations are lovingly shot, but the cinematography by Emmanuel Soyer doesn’t pay as much attention to lighting Sy himself. There is a knowledge and a skill to lighting dark skin, and unfortunately it’s not on display here. The direction is also uninspired, its overall lacking highlighted even more by two sequences (the heavenly feel of slow, billowing white curtains in a hazy, luminous colonnade; the way ink slowly runs down a diagram, dripping like tears) where the visuals actually offer a deeper meaning than the film’s standard, rote depiction of the situation.

Dr Knock is in cinemas from 2nd August through Umbrella Entertainment.

Written By
David Nagle
More from David Nagle
In 2016 in these very pages I wrote about how Deadpool was...
Read More