Directed by Kevin Macdonald, Whitney is the most recent documentary about the life and struggles of singer Whitney Houston. It is released only a year after Nick Broomfield’s documentary Whitney: Can I Be Me, however Macdonald’s film has the benefit of authorisation from Houston’s family. The result is a compelling and quite comprehensive film.

Macdonald uses private footage from home videos taken in Whitney’s home, on the road, and so on, to paint a picture of Whitney’s life from an early age. Whitney was born into a family of female singers – her mother is Cissy Houston, her cousin is Dionne Warwick – and her future was possibly destined from the beginning. The film has a big reveal at the end, and although this is now quite common knowledge this reviewer will keep quiet for those who don’t already know. But what the film essentially reveals is the level of dependency and co-dependency of Houston and her family – on each other, on Houston as the ‘gravy train’ for the entire family, and on drugs. 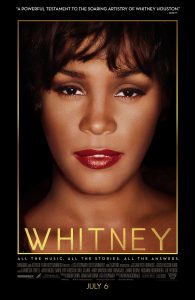 Whitney Houston, as the talent, essentially becomes an industry (or even a product, the subject of objectification), with her entire family (and extended family) reliant on her for their income and way of life. Her brothers, for example, were both on the payroll, but what their actual jobs were is a little hazy. It would seem they were the ones who initially introduced Whitney to drugs, so the assumption is that their role was to supply, partake and be company for the highs.

A great many members of Whitney’s network have participated in the film, and Kevin Macdonald had the family’s blessing in making the documentary. As a result, there is a sense of reverence in the way they present the Whitney Houston story. Despite the dependence of many of her family on her for income, Whitney was adored and protected by them too. Her family were enraptured with her talent and they were essentially a tight unit. Macdonald does very well to navigate the space between the two aspects of Whitney’s life; the drugs, pain and mental anguish, and the immense and successful talent and artistry.

There are only a few people who refuse to give much away in the film, notably Whitney’s husband Bobby Brown. He denies that drugs played a part in Whitney’s death and doesn’t elaborate on their life together, at least not on film. Despite this, the film covers a great deal – including the breakdown of Whitney’s relationship with her father (who attempted to sue her for $100 million) and questions around her sexuality and romantic relationships.

Although the film delves into very dark material, it also manages to remain quite light. This is due, in part, to the soundtrack of Whitney’s songs. Bright and upbeat, there really is magic in pop music.

Whitney is in cinemas from 26th July through Transmission Films.

Written By
Amy Taylor
More from Amy Taylor
Neon Bull (or Boi Neon) is a realist and observational take on...
Read More