Jen (Jackie van Beek) and Mel (Madeleine Sami) don’t have a lot of faith in the relationship gig. They’ve been disappointed before and have found after much experience that people are, on balance, jerks. Not all, but a fair amount. Enough to sustain a business model at least.

They’ve figured out that if there are so many jerks in the world, it figures that a good deal of people must be stuck in relationships with them. These people may even be jerks themselves, but that is no matter. If Mel and Jen can help set them free, then there’s a profitable day’s work. If they are worried that this kind of deception is just as questionable as many of the people they encounter, it doesn’t show.

Cynicism is a prerequisite when catering for the people who would sooner run for the hills than face the awkward turtle themselves, and Jen and Mel have it in spades. Part of the reason they became friends in the first place and have as little faith in love as they do goes back years to when they discovered that they were dating the same two-timer.

For all the New Zealand buddy comedies that have charmed the globe in recent years, The Breaker Upperers is one of the first efforts directed, written by and starring women to arrive with hype, and it’s a welcome change of personnel. It helps to have the Taika Waititi stamp of approval (executive producer), but this is a worthy, if patchy, crowd-pleaser regardless. 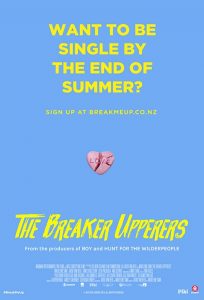 Van Beek and Sami might be well-established in New Zealand through sketch comedy and domestic productions, but this will be a first introduction for most viewers beyond their shores. Emulating a Broad City-type shtick, the duo carry this film with a bawdy mix of casual crudeness, blunt misgivings about relationships and a love of terrible karaoke. And it’s a whole lot of fun, even if The Breaker Upperers doesn’t really amount to a plot.

In their efforts to fulfil their clients’ requests, Mel and Jen manage to remain loveable despite the path of emotional destruction left in their wake. Of course the premise is absurd, but it’s also one loaded with possibility, and van Beek and Sami attack it from all sides with gags alternately surreal and grounded. This scattergun search for laughs can occasionally betray a sketch comedy background when some scenes try for too much of a good thing and overstay their welcome without adding much, if any, progression of a theme.

The film is arguably strongest when it dials down the antics, and focuses on the main relationship at stake between Mel and Jen. Otherwise Mel’s uncomfortable romance with the underaged Jordan (James Rolleston) warrants some giggles, and of the remaining supporting roles only Celia Pacquola’s character Anna, who takes the ‘disappearance’ of her husband particularly badly, registers an emotional response aimed at anything other than hilarity. It is no surprise that she lends a grounding influence to the inconsistent material that at one stage goes as far as enacting a Celine Dion music video.

Simply left to chat, van Beek and Sami show us their appeal. In one moment when the two are sitting on the bonnet of a car watching the night sky, Mel pauses to tell a passing jogger and her dog to keep in mind a couple of creepy dudes down the way; it adds little to the plot but speaks volumes about the film’s moral compass. Overall they may have made a patchy feature debut, but van Beek and Sami have delivered more than enough to hope for more.

The Breaker Upperers is in cinemas from 26th July through Madman Films.