Bust out the champers. It’s time to party because Mamma Mia is back. With the stage musical returning to Melbourne just last week, it’s a busy time for Bjorn and Benny with the sequel now hitting screens. But with Meryl dead and almost all of the big ABBA hits already done in the original, what exactly does Mamma Mia! Here We Go Again have in store for us ten years later?

It’s a trip down memory lane in Here We Go Again, with Sophie (Amanda Seyfried) preparing to reopen the hotel previously managed by her late mother, Donna (Meryl Streep), on Greek island, Kalokairi, one year after her death. Don’t sweat, there’s still a Meryl appearance and she’ll probably still get her yearly Golden Globe nomination despite only being on screen for about five minutes.

Much of the film is spent flashing back to Donna’s earlier days (where she is played by the luminescent Lily James) as she meets three potential suitors, Harry (Hugh Skinner), Bill (Josh Dylan), and Sam (Jeremy Irvine) playing the younger versions of Colin Firth, Stellan Skarsgård, and Pierce Brosnan’s characters, one of whom is Sophie’s biological dad. Thankfully, the film steers clear of any slut-shaming because dudes, it’s 2018 and that shit won’t fly.

Ol Parker (Imagine Me and You) directs his third feature film while also serving as screenwriter, with Richard Curtis and Catherine Johnson collaborating on the story. Is there much of a storyline? Eh. It’s there to service as many more ABBA songs as possible. Sophie and her partner Sky (Dominic Cooper) fight in an early scene to justify the use of ‘One of Us is Lying’ but they get loved up again pretty quickly after Sophie gets to sing ‘Angel Eyes’ with her mother’s friends (Christine Baranski and Julie Walters) and Sky concedes following no further screen time. What is beautiful though is the warm mother-daughter message that shines through and evokes all the feels, especially in the numbers ‘I’ve Been Waiting For You’ and ‘My Love, My Life’. 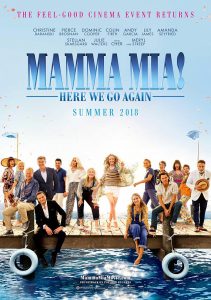 It’s true; most of the great ABBA songs have already been done in the original, but that doesn’t stop them from recycling the best ones among a bunch of other B-side songs. Obviously ‘Mamma Mia!’ is a must, and ‘Dancing Queen’ is the highlight of the film with Colin Firth and Stellan Skarsgård doing their best “I’m flying, Jack” impersonations while leading multiple boats to the island to reunite with Sophie. There’s also a fun, even if it is cringeworthy, ‘Waterloo’ number in a Parisian restaurant, and a fun opening with ‘When I Kissed the Teacher’. The costumes too, continue to be great fun.

If I have one criticism it’s that Pierce Brosnan doesn’t sing enough this time around because come on, his over-the-top WHEN YOU’RE GONE’s in ‘S.O.S’ were without a doubt the best parts of the first film. When he does sing here it’s unfortunately not as over the top, and Jeremy Irvine’s Uh-HUHHHHHHH’s in ‘Knowing Me Knowing You’ just don’t quite measure up. However, it’s pretty enjoyable listening to every single male singer in this film butchering ABBA. It just feels right.

In general, the filmmakers certainly haven’t set out to choose the best singers for the Mamma Mia films but it doesn’t really matter because it’s ABBA so it can’t be much worse than the drunk renditions you typically hear at karaoke bars or weddings. Cher turns up late in the piece as Sophie’s grandmother, Ruby, and while she can’t really move her face she does sound pretty great when belting out ‘Fernando’ to Andy Garcia. Seyfried is probably the only other talented singer in the film, other than musical theatre performer Jessica Keenan Wynn as Young Tanya who unfortunately isn’t really given the opportunity to showcase her vocal chops other than in backing up Lily James. Lily James can, however, hold a tune and it’s no mean feat playing young Meryl. Her star has been on the rise since 2015’s Cinderella and it doesn’t look like it will still slow down any time soon. Hugh Skinner is probably the most fun to watch as the younger version of a bumbling, awkward, Colin Firth. He has the awkward mannerisms down pat (although have you seen the photos of young Colin Firth? He was SMOKIN’!)

All in all, the experience of watching Mamma Mia! Here We Go Again is similar to a karaoke night. The singing isn’t amazing, there are cringeworthy moments, but it’s bloody hilarious and good fun, and probably all the more so if you’re drunk. Haters of movie musicals should obviously stay away from this film (and also my life), but everyone else will probably have a ball.

Mamma Mia is in cinemas from 19th July through Universal Pictures.

Written By
Claire Robson
More from Claire Robson
It seems that good American comedies are hard to come by these...
Read More