It’s hard to know what to feel when emerging from See You Up There, the ambitious new film from Albert Dupontel – writer, director, and star. Adapted from the novel The Great Swindle by Pierre Lemaitre, this grand and crowded film evades any neat classification, being a blackly comic adventure set against the Great War’s legacy of death, destruction and deception. It’s an ambitious project that is at once immensely enjoyable and intensely sobering.

Just days before the armistice is to be announced to hail the end of the Great War, lowly soldiers Edouard Pericourt (Nahuel Perez Biscayart) and Albert Maillard (Dupontel) are among a weary trench-bound troupe duped into a charge of enemy lines by the merciless Lieutenant Pradelle (Laurent Lafitte). As Maillard narrates, it is arguably even more stupid to be the last person killed in a war than the first, and it speaks volumes of Pradelle that he would hear that peace is coming only to send his troops off to their potential death if only to book a few scalps before arms are laid down. The gamble is reprehensible but it pays off for Pradelle, even if it all but destroys the prospects of Albert, a former bookmaker who survives being buried alive courtesy of a dead horse, and Edouard, an artistic and estranged son of a wealthy banker and now with only half a jaw.

This set-up alone is more than enough to justify a standard pursuit of revenge, but the scope of the book poses complications for Dupontel both narratively and technically. There is a lot going on here, and potentially a lot more to fit in.

As the war ends and the countless body counts mount, Maillard and Edouard are alive but only barely. With Edouard faking his death to avoid returning to his father, there’s only so much that can be done from a bunker. In secrecy Edouard sets about reinventing himself behind a vast array of masks that he can only grunt through while Maillard supports him through whatever menial jobs he can find. 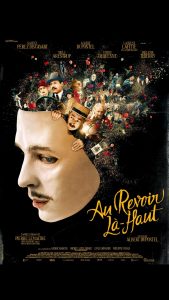 The results are alternately surreal and comical and are interspersed with scenes of Pradelle’s dubious post-war success, profiting from the misery and confusion of the clean-up. Feeling unjustly treated, Edouard embarks on a con himself, to which Maillard reluctantly agrees – selling war memorials they will never build to the very leaders who sent them into battle.

How all this fits together would be impossible to summarise in a review so brief, let alone two hours of film, and Dupontel has done his best to muscle in as much as he can with the help of the author. Perhaps too much.

It’s a lavish production and bears more than a little resemblance of the work of Victor Hugo in its scope, its twists and turns, its false identities, its hierarchical clashes. Sewn into the tangle of plot lines are clear allusions to Les Miserables and The Man Who Laughs, with Edouard constituting a light blend of Jean Valjean and Gwynplaine and Pradelle mirroring Javert in more than a few ways. Thankfully Lafitte as the villain turns in a performance more in the manner of a sneering Sacha Baron Cohen than a Russell Crowe. Maillard, on the other hand, is harder to read. He never fails to look bewildered by the messes he finds himself in and acts more as a silent comedy hero – prone to mishaps but somehow always ending up on his feet.

Though while See You Up There can be commended for juggling so many different styles and moods and genres, Dupontel is guilty of focusing on all those balls in the air a little too much in order to maintain the energy while, as a consequence, losing sight of the characters driving it. This range of experiences may be comfortably conveyed in a book over a series of chapters but can seem to clash rather suddenly in a production like this. Nonetheless Dupontel has made an admirable and entertaining effort to realise the breadth of his inspiration.

See You Up There is in cinemas from 19th July through Umbrella Entertainment.