Iram Haq’s What Will People Say is a harrowingly personal film. Nisha (Maria Mozhdah) is a 16-year-old Norwegian who’s susceptible to the allures of teenage life: idly hanging around with friends, partying, and finding a boyfriend. Her family life is markedly different. Nisha’s father, Mirza (Adil Hussain), and her mother, Najma (Ekavali Khanna), expect nothing less than strict obedience to their beliefs brought over from Pakistan. Even one transgression could bear serious consequences.

When Nisha and her boyfriend Daniel (Isak Lie Harr) are caught by Mirza in bed together, all hell breaks loose. Mirza lashes out at Daniel; he’s quick to flee the apartment. Nisha is left alone, in the dimly lit apartment, to face her father’s fury. “I don’t love him”, she exclaims, refusing to marry Daniel. This sets off a traumatic series of events that upend Nisha’s life.

With the help of his son Amir (Rohit Saraf), Mirza manages to coax Nisha into their car. Like his father, Amir stares unflinchingly ahead, assured of the righteousness of his beliefs and actions. Even when Nisha wails as she realises their intentions of sending her away, Mirza and Amir’s faces don’t register a change; they’re hardened by their loathing of Nisha’s behaviour. The car eventually pulls up at the airport. Mirza tightly grips Nisha’s wrist, as he escorts her to the plane that will take her to Pakistan, to his family’s home where she will have to abide by traditional and religious laws. 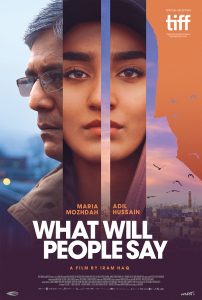 In only her second feature film, Haq evinces a special flair for image. It’s not the dialogue or the music we remember, but the composition of Haq’s film frame: Mirza towering over his children in the domestic space, Nisha sprinting to be home before her absence is discovered, the family unit at the dinner table. The images have a sharp, rhythmic quality to them, which confer an affective power on the film. When Haq packs the image with movement, of running and rushing and eyes darting around, we’re distressed with the knowledge that something untoward might happen. And when everything is still, with the characters standing like sculptures, Haq generates an air of melancholy and helplessness.

However, words still matter in What Will People Say. The title isn’t just a simple way of encapsulating the film, but a phrase that is meaningfully uttered by Nisha’s parents. Despite the complexity of the film’s themes, ideas and causes, the title goes some way to explain the motives behind Nisha’s mistreatment. Haq emphasises Mirza and Najmi’s hyperawareness of the prevailing social views of their community. There’s the impression that, in some part, they’re pressured by expectation: Najmi anticipates the unsociable looks she’ll get from acquaintances, and Mirza is remarkably receptive to his friends’ counsel. It’s this desire to conform that overrules all else.

This film is more personal than political. Drawn partially from Haq’s own life and experience, What Will People Say primarily works on a visceral level, causing us to identify with Nisha’s plight. Our feelings of sympathy are firmly directed towards her. The film shows how the structure of a society acts to suffocate and deprive its members of particular choices, lifestyles and opportunities in the name of honour and purity and dignity.

There’s always a risk that such films will descend into polemic and didacticism. That characters will have no internal life, and merely act to confirm viewpoints or ideologies. Haq steers clear of this course. And it’s her personal approach that inoculates What Will People Say from such criticism. It is Nisha’s story, set against a backdrop of restriction, conformity and, at times, inhumanity. However, Haq never loses sight of the humanity that boils underneath societal stricture.

What Will People Say screens at the Scandinavian Film Festival from 12th to 29th July. For session times go here.