It was never going to be an easy task for a Marvel film to follow Infinity War. Perhaps this is why Peyton Reed’s follow up to 2015’s Ant-Man seems like such a messy and wasted opportunity. In the context of the greater happenings of the MCU this seems like a mid-meal palate cleanser, washing away the bitter aftertaste that Infinity War left in its wake with this entertaining and often funny entry. Judged on its own merits, it’s an incredibly generic offering that dips back into a lot of the bad habits that Marvel seemed to have abandoned several years ago.

Paul Rudd’s charm returns in Scott Lang, who, after his appearance at the airport battle in Civil War, was sentenced to two years house arrest for breaking the Sokovia Accords. That sentence is almost up, and with freedom looming and the opportunity to spend more time with his daughter becoming real, Scott just wants to lay low until his time is up. Yet with strange visions plaguing his dreams and contact being reinstated with Dr. Hank Pym (Michael Douglas) and his daughter Hope (Evangeline Lilly), now with her own super suit, an unresolved mystery is on the verge of being solved; what happened to Hope’s mother who went missing thirty years ago?

After a string of Marvel films that were tied in with the drive towards the next big team-up, Ant-Man and the Wasp seems like the most standalone film from this studio we’ve seen in a while. There’s the bare minimum of connection to the wider world of the MCU, which could have been a great opportunity to do something unique, to tell a story that could have done its own thing without being shackled to a structure that exists to solely set up for a sequel. However, in a theme that seems to sum up this film: it’s an opportunity that has been squandered, going instead with the regular Marvel three-act structure that has been seen many times before and done a lot better. The closest comparison is the hit and miss nature of the Phase 2 films (2013-2015). 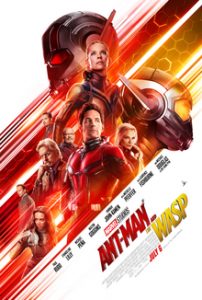 Five people are listed as writers on this project, including Paul Rudd, presumably for some of his improv, which might explain a little of what’s gone wrong. After a string of decent stories that worked on fixing Marvel’s Achilles heel of forgettable villains, we’re back to exactly what those films tried to avoid. Hannah John-Kamen’s ‘Ghost’ is the absolute nadir of superhero villains; whatever the writers were going for it’s been totally lost in the most forgettable villain of the week since that elf guy from Thor 2 – a character so bland it’s not even worth googling his name. She has almost nothing to do with the overarching story the film is trying to tell and her contribution is limited to one scene where she ties the three main characters to chairs and yells her backstory and motivation to them. It really seemed like we were past this.

If there’s one saving grace it’s the duo at heard of this story. Paul Rudd fits the tone and personality of Ant-Man like a glove. This character is still the most eye rolling contribution to the MCU but Rudd is the perfect fit for it. Although she didn’t get much to do in the previous film, all other performances, direction and writing pales into insignificance when compared to the towering presence of Evangeline Lilly. She genuinely seems to be enjoying herself and her screen presence steals every scene she’s in, even when alongside fan favourite Michael Peña‘s Luis.

There’s just enough personality from performances and enough visual flair to save this from becoming a completely generic action film, but Peyton Reed’s direction does it no favours. A compelling story is totally absent and memorable action beats are at a bare minimum. Perhaps if a more inventive director had have taken the reins this sequel could have broken new ground and accomplished something. With a cast this charming and all the visual hijinks that could be squeezed out of Ant-Man’s shrinking powers, there seems to be several large missed opportunities. This shouldn’t be laid at the feet of one man, but with two Ant-Man films, The Break Up and Yes Man to his name, the simple answer seems to be that Peyton Reed really is just a boring filmmaker.

In the annals of the MCU Ant-Man continues to be the film and character that everyone just shrugs their shoulders over. Ant-Man and the Wasp has one or two fun moments playing around with this tiny hero, but this is as generic and forgettable a film as it was possible to make with this material.

Ant-Man and the Wasp is in cinemas from 5th July through Disney.