In cinema there is a phenomena known as the “Cult” film. A film can become a cult classic for a number of reasons, but certifiable bad taste seems to do the trick. Fifteen years ago such a phenomenon hit screens in Los Angeles and slowly but surely took over the world. In cinemas everywhere, regular screenings of “the worst film of all time” see die-hards and newcomers alike yelling and throwing spoons at Tommy Wiseau’s masterpiece The Room. The unthinkable success of the film saw it all the way to the Oscars last year with James Franco’s impressive turn as the writer/director/star of The Disaster Artist, earning him a Best Actor nomination. Tommy Wiseau and best friend Greg Sestero are now mainstream names, but their journey continues with the release of Sestero’s new masterpiece, Best F(r)iends.

The enduring friendship of these two unlikely heroes at the heart of The Disaster Artist has taken them on a wild ride, but all Wiseau ever really wanted was to be taken seriously as an actor. Sestero, being the amazing friend that he is, also wants the world to see Wiseau in this light and has written a two part film saga loosely based on their real life friendship and experiences and starring the two as “best friends”. Sestero wrote this film to showcase Wiseau’s skills as an actor, however, as usual, the enjoyment of this films comes from his complete ineptitude as an actor, but particularly as a leading man (he botched his very first line of the film, which somewhat sets the tone of the whole piece). 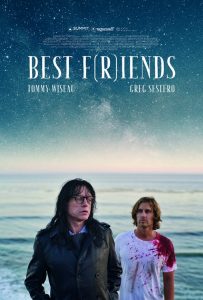 Sestero plays Jon, a down on his luck ex-army man sleeping rough on the streets of LA whose chance meeting with mysterious mortician Harvey (Wiseau) takes him down a strange and dangerous path of crime and intrigue. The two go into business together selling gold teeth, however Harvey’s shady dealings with mysterious strangers (a surprise guest appearance from comedy stalwart Paul Scheer) and a blooming romance between Jon and bartender Traci (Kristen StephensonPino) creates tension between the two friends, which will all play out in Part 2.

Fans of The Room, cult cinema, or bad taste are going to love this film, equally, those who were introduced to these strange auteurs through The Disaster Artist may find enjoyment from seeing their new offerings. However, this film was not made for average cinema-goers. In a word, it is terrible; the plot is so loose and untethered to the real world, or any definable genre it is impossible to make head nor tale of, the performances are as ridiculous as ever. However, this film is much more cinematic considering the budget is significantly smaller than that of The Room.

Part 1 certainly does not stand up on its own, but as a long time dedicated fan of The Room, this reviewer cannot wait to see part 2.