Annihilationis a rarity – a film with action and intelligence, in equal measure. Alex Garland, who directed and adapted Jeff van der Meer’s novel, continues to make challenging, uncompromising, even risky science fiction films. This latest effort is not closely based on its source material; in fact, much was changed. What Garland does is maintain and recreate – visually and aurally – its distinctive mood. Through alluring detachment and a lofty intelligence, Garland’s film is simultaneously intriguing and alienating, similar to the ways in which the characters are intrigued and alienated as the plot progresses. And whilst the film’s ending may leave some unsatisfied for its staunch refusal to impart any easy answers or neat resolutions, one cannot help but feel admiration for the way it calmly but boldly insists on its ambiguity.

The film opens with biologist Lena (Natalie Portman) quarantined and being questioned about the mysterious circumstances of her return from a mission. She remains earnest and aloof, appearing to refuse to divulge too much. In a flashback, it is revealed that her soldier husband Kane (Oscar Isaac) went on a similar mission and disappeared. After almost a year, he returns, but different – he is stoic, with no memory of what happened to him or how he returned home. Frustrated by this sudden turn of events, Lena decides to follow in her husband’s footsteps and venture into ‘Area X’ – a region defined by a strange but expanding shimmering border. She is joined by an all-female team: paramedic Anya (Gina Rodriguez), geologist Cass (Tuva Novotny), physicist Anya (Tessa Thompson), and psychologist team leader Dr Ventress (Jennifer Jason Leigh). What they find beyond the shimmer is disturbing, confronting and bewildering, culminating in a climax which seems to defy any obvious sense. 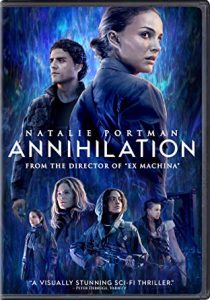 Having previously demonstrated his controlled brilliance in Ex Machina, Garland is perhaps even more uncompromising in realising his artistic vision. Garland’s screenplay is an exercise in sobering restraint – from the opening scene, it carefully reveals and withholds details and information to maximise tension and keep its audience intrigued. There is a mounting sense of inevitable, palpable anxiety the further and deeper into Area X they venture. This tense, eerie mood is complemented by its colourful yet foreboding cinematography and its pensive, acoustic score, contributing to the film’s unsettling and dispassionate opacity.

More broadly, the film explores intriguing ideas from biology and psychology, and the relationships between them. Theories about mutations, chimeras and metamorphoses intermingle in interesting and unexpected ways with meditations on grief, trauma and identity. This is a film which resists and actively undermines easy interpretations. It demands an open-minded and attentive engagement, one capable of accommodating uncertainty and confusion. It also demands reconciling that these qualities do not necessarily detract from a film’s quality – in fact, it may even be dependent on them. How this reconciliation works in practice will differ for everyone, but nevertheless the film should be applauded – for its distinct vision, its technical prowess and its uncompromising artistic integrity – even if we may not be able to readily decipher or articulate its message or meaning.

Annihilation is now streaming on Netflix.

Written By
Dan Santos
More from Dan Santos
Have you ever wondered about the people behind the recognizable, but faceless,...
Read More