Choosing to cast two unmistakably heterosexual men as a gay couple isn’t necessarily a crime; filmmakers do it all the time. But if you’re going to take that chance, you better be able to pull it off.

Ideal Home and its two male leads, Erasmus (Steve Coogan) and Paul (Paul Rudd), don’t even come close; it’s easy to see past Coogan’s floral wardrobe and Rudd’s hipster singlets. More importantly the pair, who play a same-sex couple whose lavish lifestyle is interrupted by the arrival of 10-year-old Angel (Jack Gore), share little on-screen chemistry, failing to ever give the impression of a loving couple.

In his defence, writer/director Andrew Fleming intentionally positions Erasmus and Paul as a couple at odds. In our first glimpse of Erasmus as an extravagant TV chef and Rudd as his hapless producer, we observe them exchanging barbs with not even a semblance of flirtatious energy. It’s difficult to get over this first impression, but nor does Fleming give them many chances to express even hints of love.

This lack of affection between the two leads has a snowball effect on the rest of the film, as the audience is left with little reason to care about them and their dilemma. Angel, it turns out, is Erasmus’ grandchild who is as unwilling as Erasmus and Paul to join their living situation. But with his father in prison, Angel has no choice and nor do his reluctant foster parents. 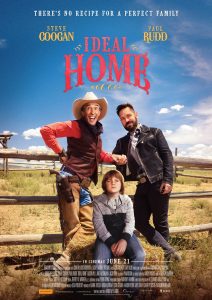 It’s at this point that we’re supposed to become invested in Erasmus, Paul and Angel (now called Bill), gunning for them all to overcome their displeasure and become an unlikely close family. What makes this difficult is that not only are Coogan and Rudd unconvincing as lovers, but they are unconvincing as characters. Erasmus is little more than a caricature of a human, his obnoxiousness and selfishness making him consistently unpleasant. By default this makes Rudd the more amiable of the two, but his weak-willed and whiny nature make us pity him, rather than empathise with him. Not even Angel/Bill is particularly likeable; he spends his first fortnight living with Erasmus and Paul in silence, save for intermittent requests for Taco Bill lunches.

As the trio become more intertwined in each other’s lives, the plot allows a bit of room for character progression and emotional breakthroughs, but Fleming seems blind to these opportunities. Instead, he messes up these moments with poor timing and an insatiable desire to show the pair bickering again.

In fairness, there are moments when this exchange is funny. But each time their behaviour warrants a laugh, you’re left wondering why the whole film isn’t more like this. Had Fleming chosen to play up the comedic element and turn the film into a farce, at least this would have made the characters’ flaws a strength. Instead, he leaves the audience in a difficult position; on one hand, we’re supposed to hate our leads; on the other, we’re supposed to hope that everything turns out for the best.

Ultimately, by giving us characters so unworthy of any of our emotions, the whole film feels rather pointless. Like the characters, you feel no more fulfilled by the film’s end then you were at the beginning. The outcome is not necessarily a terrible film, but just a really neutral one, making the ideal home for this one the bin.

Ideal Home is in cinemas from 21st June through Icon Film Distribution.