There are few films in recent memory which are as magnificently crafted as Israeli film Foxtrot. Skillfully directed and written by Samuel Maoz, the film is a moving meditation on grief and fate, infused with a sociopolitical critique of the hypocrisies and ennui of war. Boasting a tightly written screenplay and superb cinematography, the film is an absorbing, perceptive portrait of a family dealing with the death of a loved one, and the angst, anger and regret this provokes. This is stirring filmmaking – the result of a distinct directorial vision executed with empathy, poise and flair.

The film is divided into three interrelated parts. It opens with Michael and Dafna Feldmann (portrayed by Lior Ashkenazi and Sarah Adler, respectively) being informed of their only son Jonathan’s (Yonathan Shiray) death. He was an Israeli soldier. Army officials visit their apartment in Tel Aviv to express their condolences and explain how the burial will proceed, but the Feldmanns are too distraught. After an unexpected turn of events, we gain further insights into the family’s dynamics – their relationships, their memories, their histories. Each of the film’s three sections has its own distinct tone and focus, but together they form a cohesive whole. 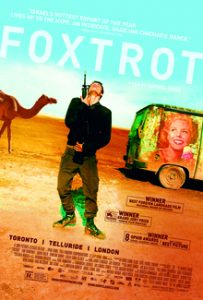 The film’s emotional power originates with its screenplay. Patient, perceptive and poetic, it generously allows the characters the time and the space to process their emotions – grief, boredom, melancholy, regret. This lends the film a grounded realism. We are shown personal moments and intimate conversations, and the performances are all attuned to the nuances and incisiveness of the screenplay. What is particularly notable is the way in which it generates its emotional impact both through what is revealed, and what remains unspoken or implied. It has a delicate parsimony, and its potency only gathers cumulative momentum.

The screenplay’s generosity is seamlessly complemented by the meticulously constructed imagery. Giora Bejach’s cinematography is simply masterful. Shot after shot after shot – all exquisitely framed – imbue the film with a quietly moving visual lyricism. His lens is equally adept at capturing despair and angst in intimate close-ups, or loneliness and languor in gazing long-shots. But there is also an undeniable beauty and grace to these images as they blend into and reinforce each other.

Furthermore, the diverse use of music is tonally balanced with the imagery. At times, wistful and pensive, at others upbeat, nevertheless (as with the screenplay) the film understands the palpable power of silence. Even the film’s delightfully unexpected dance scene (which, like Ex Machina’s in its year, should be in the running for the year’s most memorable dance scene in a non-musical film) does not feel tonally out of place. Instead, like the dance referred to in the film’s title, these visual and aural elements only lend themselves beautifully in the service of a quietly mesmerizing, fluid whole.

This is impressive, accomplished filmmaking.

Foxtrot is in cinemas from 21st June through Sharmill Films.

Written By
Dan Santos
More from Dan Santos
The anticipation around Blade Runner 2049 has been palpable. Given the original’s...
Read More