In Upgrade, director and screenwriter Leigh Whannell conjures a vision of the near future in which technology’s pervasive influence has become the norm. We are on the cusp of surpassing the human-machine boundary, ushering in an age of hybridity and cyborgs. The film is solid in its more technical elements – especially its dynamic editing and its sharp cinematography – and its grisly violence is indulgent, often comical. Nevertheless, overall it is hampered down by its weak screenplay, which relies too heavily on underdeveloped characters and archetypes. The result: a highly entertaining and violent romp, but one which relies on narrative threads which do not make the most of an intriguing premise.

In the not-too-distant future, computer-mediated technology controls most aspects of social life. Grey Trace (Logan Marshall-Green) is wary of this technology, and stays at home working as a mechanic while his wife Asha (Melanie Vallejo) works for a large technology company. One evening, Grey and Asha deliver a car back to a client – young, reclusive and innovative technology developer Eron Keen (Harrison Gilbertson). He shows them his latest creation, a miniature device called STEM designed to improve and enhance anything it is connected to. On the way back home, they lose control of their AI-driven car, and they end up in a dangerous neighbourhood. There, they are confronted by a gang of criminals, who kill Asha and leave Grey a wheelchair-bound quadriplegic. And whilst Officer Cortez (Betty Gabriel) is assigned the case, the film largely focuses on Grey’s tech-augmented pursuit for vengeance. 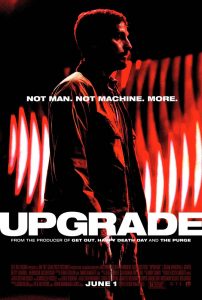 The film is most entertaining during its action scenes, which are bloody, violent and ruthless. Stefan Duscio’s cinematography is crisply lensed and Andy Canny’s editing is ragged and kinetic, and together they make Grey’s increasingly gory exploits riveting to behold. The action is complemented by a dark, edgy sense of humour. In particular, Grey’s banter with STEM (voiced by Simon Maiden) is amusing and often witty, lending the film levity and a tone of self-deprecating seriousness.

However, the screenplay could have been more nuanced, and taken more risks to explore and develop its ideas. At its core is an interesting premise, but Whannell does not do enough to distinguish it or its execution in more unique ways. This tendency also applies to the characters. Unsurprisingly, Marshall-Green has the most material to work with in developing Grey, but the rest of the cast and characters end up either having too little to do (Gabriel as Officer Cortez) or conjuring performances that draw too heavily on well-worn tropes (Gilbertson as the eccentric and withdrawn Eron). These are lapses, or perhaps more accurately lost opportunities, so that when the narrative arrives at its seemingly inexorable twist, a sense of predictability nevertheless lingers despite the film’s visual flair.

Upgrade is in cinemas from June 14 2018 through Madman Films.

Written By
Dan Santos
More from Dan Santos
The Selfish Giant, inspired by the Oscar Wilde short story of the...
Read More