In hindsight The Incredibles was far ahead of its time. Not only is it one of the best Pixar films – which is really saying something – considering it’s about superheroes, and their legality and the morality of what they do. But it came out in 2004, with Brad Bird and his team managing to predate the current fascination for self-critiquing hero films by almost a decade. For context, in 2004 the Marvel Cinematic Universe didn’t exist and the only superhero franchises killing at the box office were the original X-Men and Sam Raimi’s Spider-Man films. 2008, the year that the Superhero Renaissance indelibly stamped itself onto popular culture, was four years in the future.

Fourteen years later, our favourite super family is back. Picking up exactly where we left off, superheroes are still illegal and the Parr family is settling into family life. The villain who turned up during the denouement of The Incredibles, The Underminer, robs the Metroville Bank, forcing the family to break out their masks and fight once again. The collateral damage is enough to force the family to relocate, but public sympathy for supers combined with a tycoon brother/sister business team (Bob Odenkirk & Catherine Keener) ignite the political debate once again. With Mrs Incredible (Holly Hunter) out on missions as a marketing campaign, and Mr Incredible (Craig T. Nelson) staying home to look after the children, world leaders convene for a global summit on whether to legalise superheroes once again. 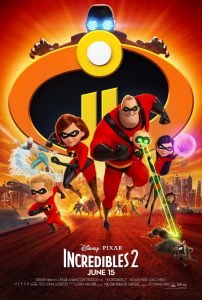 Following one of the most charming short films Pixar has ever produced (Domee Shi‘s Bao) Incredibles 2 is an exciting and welcome return to the world of the Parr family. The Incredibles ranks as one of the best superhero films ever made. It holds up spectacularly because it didn’t use brand recognition or spectacle to make itself known. It relied on memorable characters, human drama and Brad Bird’s witty, interesting script. Bird returns to both writing and directing duties for this sequel and although Incredibles 2 doesn’t quite reach the heights of the first film, it comes very close.

Pixar have always been at the vanguard of contemporary animation. The key to a good animated film is having something for both children and adults, and no one can do this better than Pixar. The sheer amount of detail in current animation continues to astonish, helped with brilliant design work by long time Pixar collaborator Ralph Eggleston. The aesthetics and Michael Giacchino‘s brilliant soundtrack seem to be taking their inspiration from 1950s Americana, which has a distinct and really appealing style. All current animation looks and sounds great but this is a step above the rest. Combined with the action, which has real energy and a great creativeness to it  – including one new Super that seems to played a lot of Portal – make this a certified fun time at the cinema.

Brad Bird said in interviews over the years that he had many ideas of how the sequel could work, but he just had to find a way to link them all together. Seeing the finished product it seems that he just rolled the dice, threw most of those ideas into the script and blended them together. There’s many ways that the politics or meaning of Incredibles 2 could be read, because there’s a lot of ideas whizzing around its head. It’s hard to keep track of what it’s going for, but it’s interesting nonetheless.

It’s been a long time between drinks but the team at Pixar have captured everything great about the first film and done it again. Incredibles 2 isn’t better than The Incredibles, but it’s certainly its equal.

Incredibles 2 is in cinemas from 14th June through Disney.