Canon announced this week that sales of its final film camera were coming to an end. The medium of physical film has held on so far during the Digital Revolution, but in the last few years it seems that modernity has finally claimed victory. Film has its place in the world, but with the ease and sheer volume of digital photography, the industry that once ruled an entire art form is about to be taken off life support.

In 2010 the call went out in the United States that the last printing house still developing Kodachrome film would finally stop. Kodachrome was the first successful film that photographed in colour, and to many it’s still the most beloved. Once this was done, that was it; there was nowhere in the world still commercially printing photos from Kodachrome negatives. This was in Parsons, Kansas, and it lead to many making a pilgrimage across the USA to this small town to finally develop old negatives that had been left untouched for decades. New York Times journalist A. G. Sulzberger wrote an article about this rather melancholy weekend, which is the basis for Mark Raso’s second feature film.

Matt (Jason Sudeikis) is a thirty-something from New York who has chosen the unfortunate profession of being a record executive in an age where the music industry is changing quicker than ever before. He has an unparalleled ear for music, which “would have been great 1998” but is now threatening his job due to the inability to sign popular artists to his record label. Matt’s father Benjamin (Ed Harris) is also in the art world, having been a world renowned photographer for most of his adult life. Yet this means little to Matt, who has excommunicated the old man due to a childhood of neglect and adultery. A meeting with Benjamin’s assistant Zooey (Elizabeth Olsen) gets this story going: Benjamin is about to die, and for one final outing he, Zooey and Matt are going to drive to Kansas to get his final case of Kodachrome developed. 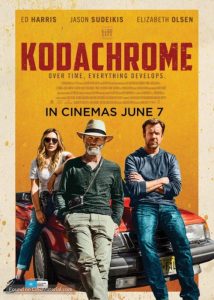 The nostalgia industry is a vein that seems to have been tapped into a lot lately. Kodachrome is the latest in a string of films that seems to be pandering to a Boomer fantasy of how things used to be before the social and technological paradigm shifts of the past decade. This isn’t automatically a negative, but when mixed with a screenplay littered with clichés it becomes rather annoying. Jonathan Tropper’s screenplay does its best to overcome the familiar story tropes, but when a film is as predictable as this something clearly hasn’t gone to plan.

The casting of Jason Sudeikis was an interesting choice, but ultimately a poor one. Sudeikis’ career up to this point can be summed up with ‘sarcasm and stubble’; he’s more suited to his roots in improv and Hollywood comedies. The transition to a serious role simply doesn’t fit his talents, especially when you’re up against an actor of such calibre as Ed Harris, whose deliciously nasty performance is the stand out best thing about the film. Olsen comes off the worst; she’s here for the soul purpose of spouting off exposition and frequently breaking out into large smiles. I can’t guess where her career is going next, but her extraordinary talents first witnessed in Martha Marcy May Marlene haven’t been seen in a while. Here’s hoping we get to see them again soon.

Ed Harris continues to be an uncompromising character actor who can elevate anything he’s in, but this isn’t enough to save Kodachrome’s clichéd, repetitive script. The result is perfectly watchable, but it never goes near the emotional heights it aspires to.

Kodachrome is in cinemas from 7th June through Icon Film Distribution.