In Times of Fading Light is a film about two things: a communist party member’s 90th birthday, and his once great party and political system collapsing around him.

The film is set in a very specific time and place, East Germany, 1989, right on the precipice of the Berlin Wall being torn down. The light of communism has grown very dim indeed, while in contrast the west is booming. Condensing this broad narrative down, screenwriter Wolfgang Kohlhaase has adapted the successful Eugen Ruge novel to a story of loyal party member Wilhelm, celebrating his 90th birthday.

Wilhelm is a stubborn man, steadfast in his political ideology. Bruno Ganz does a superb job inhabiting him, appearing much older than his real self and being nominated for a few awards for this portrayal. Well known in his native Germany, Bruno is more famous here for the litany of memes spawned from his portrayal of Hitler in Downfall (my personal favorite – Hitler rants on Triple J).

In attendance at the party is Wilhelm’s wife, Charlotte (Hildegard Schmahl), step-son, Kurt (Sylvester Groth), and later Kurt’s wife, Irina (Evgenia Dodina). In absence is Wilhelm’s grandson Sascha (Alexander Fehling). The family has a complicated, detailed dynamic. Charlotte has grown to greatly resent her ailing husband and her duties as his nurse. Kurt, once himself a hard line party member is adapting to the bitter truth of its failings, seeking solitude in extra marital affairs. Irina, his wife is the show stealer. A native Russian, she is more disillusioned with Stalinism than any of them, proceeds to get drunk before the party, and bursts in mid-way to awkwardly let everyone know Sascha has fled to West Berlin, a blow to Wilhelm’s egg shell thin pride. Irina also has the best line in the film: “When you run out of bread, you can eat potatoes. But what happens when you run out of ideas?” 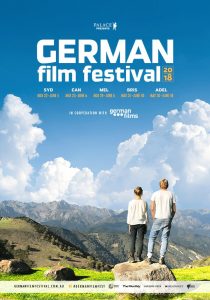 The personal narratives provide a mechanism for plenty of metaphors and stark truths to illuminate the shambles the reigning government found itself in at that point in time. The metaphors can be quite clever, such as a small boy destroying a once grand, now shoddily held together Nazi wooden table. The table Wilhem holds close to his heart is of course communism, and the boy represents the youth in revolt bringing down the once grand party. Earlier it’s disclosed in gossip some 78-year-old politician has died and been replaced by a 79-year-old.

The satire in’t exactly stinging but it is definitely there and has its moments. In particular there is plenty of humor to be found in the attendance of two young communists representing the party to honor Wilhelm. Obliged to come by communist doctrine they congratulate Wilhem reading from a script. Later he’s awoken by his wife so they can finish telling him of the latest great success of the republic: A successful German replication of French cheese. It’s all mildly humorous.

This is a heavily weighted political and wordy film. Whether the portrayal of shambolic communism is a criticism or a snapshot accurate depiction, it very much feels like kicking a man who has been dead for 29 years. There is no positivity escaping this fishbowl story; it starts bleak and ends bleak. The cast are superb and the set is a beautiful reconstruction. However, its ruthless critique proves a double edged sword, and while the film has a lot going for it, entertainment and sober representation are at binaries here with the latter being favoured by director Matti Geschonneck.

In Times of Fading Light screens as part of the German Film Festival from 24th May to 6th June. Session times for the festival can be found here.

Written By
Ben Isbel
More from Ben Isbel
It doesn’t seem like too long ago, but only last year Disney...
Read More