Is there anything original that can be done with zombies? Films, books, video games and television have all been swarmed with the walking dead over the last 30 years. Like some morbid metaphor for the subject matter the zombie genre will just not die. No matter how many of them come and go there’s always another one on its way, unable to be defeated or contained as more and more of them consume popular culture. Zombies as subtext have been deconstructed then reconstructed multiple times. What started off as a unique sub-genre pioneered by the late, great George A. Romero has now become an all purpose story device that can be applied to any tone or situation. Yet Cargo, the long developed film by Yolanda Ramke and Ben Howling, pairs zombies with one of the most unlikely categories imaginable and the results are fantastic.

Based on their short film of the same name, this is the story of 48 hours inside the pandemic*. Set in central Australia, with the massive distances being one of the best protections against the horrors engulfing the world, Andy (Martin Freeman) with his wife Kay (Susie Porter) and their baby daughter are on a houseboat trying to scavenge supplies and find a safe zone. We don’t know the details of what has happened in the outside world, but humanity is losing and it’s been going on long enough for the government to issue survival packs complete with instruction manuals and suicide gadgets. The only people who seem to be handling the outbreak are a tribe of Indigenous Australians who have gone back to country like their ancestors did for the past 60,000 years, the only people who Andy can turn to to find safety for his baby daughter. 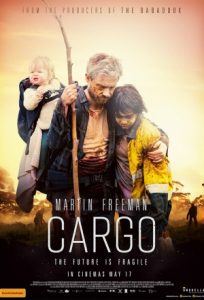 Cargo will have a brief run in cinemas followed by a run on Netflix, who swooped on the film before post-production was even finished. It would be wonderful for this film to find its audience, because Ramke and Howling have directed one of the best zombie films in years. Just when it seemed that nothing new could be done, it turns out what zombies needed was to serve as a commentary on indigenous rights and culture. This isn’t using the subject as a lowest common denominator of just wanting to play around with blood and gore, this is the genre as it’s always worked best: as a way of exploring social issues and human stories. There’s just the right amount of social commentary, where it enhances but doesn’t overshadow the plot.

It’s never easy to pick what Martin Freeman is going to do next, but seeing him in an Australian genre film is a unique surprise. Acting alongside a baby is a difficult task but Freeman does a fantastic job of carrying both the film and his little one-year-old co-stars (Lily & Marlee McPherson-Dobbins playing the same little girl). In her debut role, indigenous actor Simone Landers does struggle a little with certain monologues as a lot of child actors do, but makes for a fascinating pairing with Freeman and her other indigenous peers, especially the living legend of the Australian film industry David Gulpilil. Of everyone who appears the true talent is that of the brilliant local actor Anthony Hayes, who plays the most spectacularly hateable villain we’ve seen in a very long time.

Many of the producers who worked on The Babadook worked on Cargo, and with so much of Australian cinema being overlooked it’s sad to see many of our great works fall by the way-side. The overview of the past few years confirms that we make excellent documentaries and genre films, and Cargo is the latest of our brilliant local contributions with this layered and inventive take on the walking dead. Yolanda Ramke and Ben Howling have found a brilliant way to get indigenous representation and issues to a wider audience – just like the film, it’s a stunning achievement.

*They’re technically infected with a virus rather than traditional ‘zombies’ but let’s not get into petty squabbles about semantics.

Cargo is in cinemas from 17th May through Umbrella Entertainment.

Written By
Simon Storey
More from Simon Storey
In the town of Merced, California a small but growing sisterhood of...
Read More