For the Love of God, or to use its full title: For the Love of God: How the Church is Better and Worse Than You Ever Imagined, is the third film concerning Christian history to be released in the past two months. Perhaps it’s something in the zeitgeist, the Church’s current fragmentation between hardline conservatives and the progressive Pope. It is a fascinating spectacle to bare witness to, as is the growing secular movement gaining traction all over the world. Maybe our modern time is causing people to look back on moral history for perspective in this bizarre and hyper partisan world. Perhaps this is the reason interest in church history seems to be coming back, for even if you’re not a believer the history of Christianity is concomitant with the history of the world and it stands as one of the most fascinating topics there is. Fortunately this documentary, directed by Allan Dowthwaite and produced by the Centre for Public Christianity in Sydney, avoids the pitfalls of other recent films about this topic – this is an engrossing look into the mixed history of this powerful and ancient institution.

A team of presenters have travelled the world over to give a thoroughly global history of the church. The good, the bad and the ugly are all covered and it’s a credit to this team that they haven’t shied away from anything. From the site of Calvary in Jerusalem to the island of Molokaʻi in Hawaii, this journey to the ends of the earth reveals a complicated and contradictory study of the Christian world. History, culture and the development of thought are covered in detail, everyone will learn something here, for the sheer scope of content is staggering. The amount of information stacked into 90 minutes is a considerable achievement*. 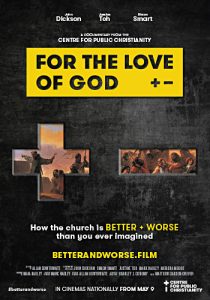 For a film that comes to us from the Centre of Public Christianity there seems to be little to no confirmation bias from the presenters. This team has gone in with an open mind and they haven’t cherry picked their information. The history of the Western world with all its failings and horrors isn’t something that can be summed up in a single film but this team has certainly tried, and their observations are not those of fundamentalists but of educated minds who are seeking truth and beneficial ideas.

If there’s a lasting summary or metaphor offered up it’s that Christianity i.e the teachings of that Galilean carpenter 2000 years ago is a bit like a beautiful symphony that a masterful composer wrote down. When played well and as intended it’s a beautiful song of peace and fulfilment, just like when the basic teachings of Christianity are applied wholeheartedly they can accomplish wonders. When adapted by the wrong people it has been used to justify some of the worst horrors the world has known like the Crusades or the Holocaust (for if anyone tries to tell you that Hitler and the Nazis were secular, they either don’t know what they’re talking about or they’re trying to further an agenda).

Watching it from the perspective of an atheist, I didn’t leave feeling more religious but I certainly felt less anti-religious. The history of the church is a study of the best and worst of humanity, and this documentary is a fascinating one. Anyone at all interested in religion, history or society should track it down.

For the Love of God is screening now through Fan Force On Demand.

*The 90 minute version is showing in select theatres around Australia. Television and streaming services will have a longer version.

Written By
Simon Storey
More from Simon Storey
There’s a strange way that an opinion of a film can change...
Read More