Locally grown science fiction is a seldom seen thing in Australia. Apart from a few series on ABC3 and a few films dropped in the local release schedule it’s a very rare thing indeed, but Australian writer, director and producer John V. Soto has added to this rare but always welcome sub-genre with The Gateway.

In her laboratory in the suburbs of Perth, Jane (Jacqueline McKenzie) is doing groundbreaking research into quantum physics and parallel universes. Funding is quickly running out and results are few and far between. When Jane’s husband (Myles Pollard) is killed in a car accident her work becomes all the more important, for if the theory is true and there are infinite universes to traverse then in one of them he is still alive and she might be able to get him back.

Soto wrote the film with the British/Australian writer Michael White, who unfortunately died back in February of this year. This was White’s first attempt at a screenplay, and he and Soto have created a fairly standard but entertaining story to hang a feature film around. There’s a lot to love for die-hard science fiction fans with the resulting story come off a bit like the love child of The Fly crossed with the dimension hopping in Rick and Morty, with writing leant a certain legitimacy considering that White was a science editor in a British magazine before his move to Australia. 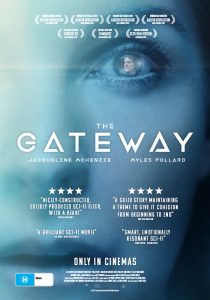 Performances are what you’d expect from a low budget Australian film. Jacqueline McKenzie has been a constantly reliable actress on the local film circuit since her debut in Romper Stomper back in 1993 and she carries this film from beginning to end. It’s refreshing too to see Myles Pollard, especially since we’re never really seen him as a baddy before and he brings a true menace to this role. Supporting work by Ben Mortley and Hayley McElhinney is good as well, especially McElhinney who with this and The Babadook is creating her own little niche role as the helpful sister in Australian genre films.

The small budget does show with the special effects and set design but for what they were aiming to accomplish this cast and crew have done a fine job with what they managed to get. Local composer Thomas Rouch – who did the music for the excellent The Will to Fly – does a really good job with this soundtrack.

Australian science fiction are words not often put together, with the abundance of local talent combined with special effects becoming easier and cheaper to master we’ll hopefully be seeing a lot more of them. The Gateway is fairly conventional but still reasonable successful, even if the ending does seem like a bit of a cop out. If you love science fiction this is worth tracking down.

The Gateway is in Australian cinemas from 3 May through Rialto Distribution.

Written By
Simon Storey
More from Simon Storey
After making what many consider to be the best film of 2011...
Read More