The Song Keepers tells the story of The Central Australian Aboriginal Women’s Choir and their journey to Germany to ‘return’ Lutheran hymns to the original custodians. Directed by Naina Sen, this film is her first feature documentary.

The Song Keepers are indigenous women who are members of the Choir, most of whom have been singing since they were small children. Many of them now elderly, they were originally taught Lutheran hymns by German missionaries who came to Australia, the first of whom arrived in the 19th Century. The hymns were painstakingly translated into numerous Aboriginal languages, and taught to choirs across the many churches and missions throughout Central Australia. Although the missionaries mostly departed, the choirs persisted for many years after. The Central Australian Aboriginal Women’s Choir is the amalgamation of the remaining singers from various communities, performing under the tutelage of a charismatic African conductor.

Problems slightly arise when the choir is presented with the opportunity to travel to Germany to ‘return’ the hymns to the Lutheran churches and parishioners. While this may seem quite straightforward, many of the women have no birth certificate or legal documentation and they have never travelled outside their remote communities. But enthusiasm counts for a great deal, and the women and their families have what it takes. The Song Keepers documents their journey to Europe, but takes into account the origins of the music, the women and their personal journeys too. 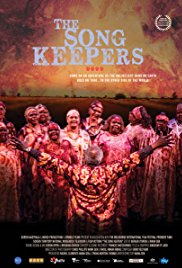 What is most striking about the film, and what stays with the viewer long after the screening, is the absolute joy which the women (and men) draw from their singing and from sharing their songs. Many of the members of the choir are part of, or narrowly escaped, The Stolen Generations. They have been subject to the crueller aspects of colonisation and cross-cultural assimilation. Yet their songs are proof of their resilience, and of the strong sense of self-possession they each carry. One woman talks of a violent childhood, and of the kindnesses and generosities bestowed on her by the missionaries. She was offered protection and comfort by the Lutheran missionaries, and in turn has cherished and protected the songs gifted to her – until she is able to return them later in life.

Naina Sen has predominantly worked as a visual artist to date, touring with musician Gurrumul and producing the visual installations for his live shows. Her first feature film, The Song Keepers shows immeasurable promise. The filmmaking is thoughtful and sensitive, but the director allows herself and the audience to revel in the joy of her subjects. The women are spirited, funny and kind, Sen has woven the various back stories of the choir members together to allow for poignancy, without being overly sentimental. The result is a beautiful and joyous film.

The Song Keepers is in Australia cinemas from Thursday 19 April through Potential Films.