This may not be the first film to be shot entirely on phones, but it may well be the most high-profile to date. When Steven Soderbergh’s name is attached, a film like Unsane is always going to draw a crowd, even it lies squarely in the B-movie column. It’s a claustrophobic and highly enjoyable thriller set in a mental care institution, and just as Avatar was remarkable only for its 3D effects and blue people, Soderbergh’s latest experiment will be remarkable first for testing the limits of the iPhone 7 Plus and second for the importance of reading all the terms and conditions.

It concerns bank analyst Sawyer Valentini (Claire Foy), a young woman haunted by the recurring face of her stalker, David Strine (Joshua Leonard). She has uprooted her life time and again to escape his obsessive attentions, and when she visits a local health facility for help coping with the anxiety and panic attacks, she is asked to sign a few forms to continue treatment. Little does she know that by signing she has agreed to 24 hours of observation. Bloody fine print, eh? In other words her temporary visit has become an internment, and she suspects that Strine has assumed an alias and taken a job at the hospital to taunt her. It’s the old catch-22 that an insane person can’t be relied upon to plead their own sanity, so her objections only grant her a longer stay.

Reportedly filmed in just over a week, Unsane is an impressive effort and testament to Soderbergh’s adventurousness. The harsh contrast and brightness of the iPhone lens may be new, but his fingerprints are all over this in countless other ways to indicate that this method suits him to a tee. Despite the familiar setting, the film showcases a palpable intimacy, escalating tension and an inspired lead that is altogether gripping. However, just as Soderbergh’s wry humour, pale tones and smooth, toe-tapping soundtrack is to its advantage, Unsane is also hampered by writing that undoes any semblance of plausibility. It’s hard to say if the short production time affected the screenwriting duo of Jonathan Bernstein and James Greer, but given that prior to this their most recent output was a Jackie Chan action comedy, The Spy Next Door (2010), their lack of practice yields unsurprising flaws. 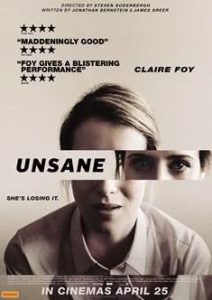 These can be hidden behind visual inventiveness at times, but not always. And that they are not so glaring is also a credit to Foy, who gives a powerhouse performance and adds an entirely new string to her bow after two seasons speaking the Queen’s English. When confined to a padded cell after protesting a little too wildly, Foy’s Sawyer delivers what would have to be as powerful an ode to common sense a stalker is likely to receive this year, belying her diminutive status, while her budding friendship with another inmate played by the affable Jay Pharaoh adds a refreshingly grounded layer to this film that otherwise relies heavily on distorted angles and heightened paranoia. Restless and intense, Foy inhabits the material and imbues a grey film with a surprising amount of colour and humour. More importantly she invests such life into her character as to offer glimpses of the film this could have been, had it been more coherent.

It’s a shame the rest of the film doesn’t demonstrate the same confidence. The possibilities that Soderbergh might have seen in this material are there for all to see. He again tackles mental health and psychological manipulation via pharmaceuticals as he did in Side Effects, and the infectious chaos of quarantine that drove Contagion is again an unsettling influence on Sawyer’s mental health. However, while Unsane takes on mental health care, the insurance industry and sexual harassment at various stages, it never fires a shot at any and instead stays faithful to routine thriller obligations. In that sense there are shades of Berlin Syndrome’s fate last year. It’s certainly more enjoyable than that film, but it’s still guilty of jettisoning baggage in its grisly haste to the exit rather than unpacking it. Unsane’s biggest legacy for now will be its encouragement to filmmakers on a small budget; on that measure it certainly exceeds expectations.

Unsane is in Australian cinemas from 26 April through 20th Century Fox.

Written By
Angus Tonkin
More from Angus Tonkin
Nearly everyone had to have been pleasantly surprised by Phil Lord and...
Read More