Ten years and eighteen films have built towards Infinity War. This has to be one of the most ambitious undertakings that anyone has ever tried to accomplish in filmmaking, a single studio devoted to telling an overarching story over the course of a decade. The hype train is running at full speed and since we Marvel fans are a dedicated bunch this studio’s place in history rests on the quality of Infinity War and its currently untitled sequel. There’s no less than 24 characters on the poster and with a plethora of backstory and plot strands to tie together, The Russo Brothers have an unmatched feat of juggling to try and get right. If this isn’t the single greatest piece of cinematic art in a generation, and doesn’t break every box office record and cure at least three types of cancer, it won’t live up to the hype.

So, does Infinity War live up to the titanic levels of anticipation? Yeah, it kinda does.

The six infinity stones that have been the part of the Marvel Cinematic Universe (MCU) for the past ten years have all been discovered. Two rest on Earth and the rest are scattered throughout the galaxy, each of them holding power over a fundamental element of existence. Whoever holds all six of them gains the power of God, and after many years of trial and error, Thanos the Mad Titan (Josh Brolin) is finally gathering them. The only things that could possibly stop him are the fractured remnants of the Avengers teaming up with the Guardians of the Galaxy.

The Russo Brothers, who directed Winter Soldier and Civil War, have clearly worked carefully to try and get all these individual elements to work together. For the most part it succeeds; working off a script by long time MCU writing duo Christopher Markus and Stephen McFeely, every character gets something to do and the many moving parts mesh fairly well together.  A film with so many ingredients inevitably comes across as overstuffed, but for what they were working with it’s a minor miracle the films works as well as it does.

Marvel, and the superhero genre in general, has always had a problem with villains. There are so many of them that it’s easy to be numbed by an ever increasing Rogues’ gallery, as every film tries to convince us that this current threat is the most threatening threat that has ever threatened our heroes and, guys no really, this is so much worse that the previous ones. There’s clearly been a lot of thought that has gone into Thanos, and it’s worked. He’s one of the best villains to ever come out of the MCU. Josh Brolin does a great job with the voice and, for the most part, the CGI looks really good. The best villains are the ones who speak sense and Thanos’ motivations do have a really warped sense of wisdom to them, almost making this ten foot tall purple titan sympathetic. 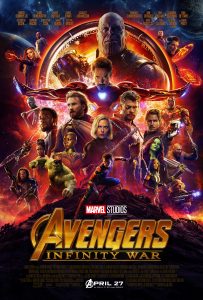 There’s nothing too deep, but for popcorn entertainment it’s all the best things in the MCU distilled into one film; the perfect blend of thrilling action and character interplay. We’ve known some of these characters for the better part of a decade and every hero plays a part. The humour works because it comes from each character’s specific voice. Of all the people who have worked on this franchise, the Russo Brothers have the standout best grasp of character and tone. Cinematography by Trent Opaloch, another one of the Russo’s usual collaborators, is excellent, delivering some of the best and most awe inspiring visuals of the MCU to date.

Marvel isn’t the only cinematic universe, but it’s the first one that truly made it work and is still undeniably the most successful. Three separate attempts at other universes crashed and burned in 2017, yet the MCU went from strength to strength. This is a cinematic watershed moment that hasn’t really been seen before; it’s easy to look at this film and see only the big budget franchise mentality but the folks at Marvel have worked long and hard to get to this point and, for what they were aiming to accomplish, they’ve succeeded. This is for the fans, both young and old, and it doesn’t disappoint, especially as everything has lead up to the jaw dropping final fifteen minutes.

It’s been a long time coming for this franchise to reach its climax and while nothing could ever match its ambitions, for the result to work as well as it does is an unmatched accomplishment.

Avengers: Infinity War is in Australian cinemas from 26 April through Disney.

Written By
Simon Storey
More from Simon Storey
If you kept up with any film news in 2017 it would...
Read More