Amy Schumer stars in I Feel Pretty, directed and written by Abby Kohn and Marc Silverstein (How to Be Single, He’s Just Not That Into You) who direct here for the first time.

Renee (Schumer) does not feel genetically blessed. She holds herself like someone who doesn’t feel an ounce of self-worth, looking at her body in the mirror in disgust and comparing herself to the super fit women at her Soul Cycle class. Working for a makeup company she adores, she longs to get a position at their headquarters alongside her idol Avery Le Clair (a hilarious Michelle Williams) instead of the dinky outsourced office she shares with a guy who isn’t a fan of conversation (Adrian Martinez). A receptionist job opens up, but she decides she isn’t pretty or confident enough to apply.

Inspired by the movie Big, one night she makes a wish to be beautiful. Shortly afterwards, after an accident at Soul Cycle leaves her unconscious, she wakes up and finds she’s ABSOLUTELY SMOKIN’. Of course, she still looks the same, but she’s unaware of this fact. She finds a new lease on life, chats up a guy, Ethan (Rory Scovel) at the drycleaners, applies for the job and gets it, and tries to ‘help’ her friends Jane (Busy Phillips) and Vivian (Aidy Bryant) get the guys. Life is good until the apparent ‘spell’ breaks. 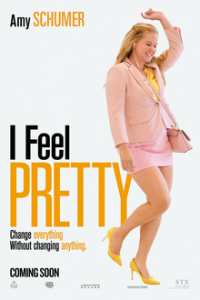 This could have been something great. I expected the whole point of I Feel Pretty to be that if you believe you are beautiful, and you project that confidence to the world, then you can find just as much success and joy as a stereotypically “hot” person. Ultimately, that’s what Kohn and Silverstein seem to be aiming for, however it’s problematic that Renee’s confidence doesn’t translate to all that much respect from others (with a few exceptions). Most of the stereotypically beautiful women in this film are portrayed as vacuous bitches who have nothing but disdain for average-looking people. When Renee presents herself as someone full of confidence, the beautiful women around her roll their eyes, look perplexed, etc. It fuels the idea that anyone less than drop dead gorgeous is constantly being judged for it, while also managing to portray the beautiful people as the enemy. There’s a short scene with Emily Ratajkowski that tries to rectify this, but it’s too little too late.

The film’s attempts at humour are on the nose. While to a point it’s the over-the-top nature of Renee’s self-love that’s meant to be funny, it still seems quite insulting to use this as the main source of humour. Someone who looks like Renee (read: still white, blonde, and average weight) actually thinks she’s gorgeous and loves herself? What a hilarious concept! Let’s milk this for laughs for ninety minutes. Leaving aside the fact that it’s incredibly simplistic and misguided to assume that beauty always equals confidence, it’s disheartening to see a film appear to say to its audience members, “Look, if you just believed you were attractive, then you could be confident too, but just know that we’re all laughing behind your back at how deluded you are”.

It feels like Kohn and Silverstein had good intentions here. It’s just a shame they’re so misguided. While it’s true that Renee does finally have a moment of realisation and gives a big inspirational speech at the end, it’s just not enough, and the fact it’s to promote a make-up line, of all things, makes it seem as disingenuous as those Dove ‘real beauty’ ads.  Not only that, but Kohn and Silverstein have also managed to commit the ultimate sin in today’s climate, of – perhaps unintentionally – sending a final message that as long as a guy thinks you’re beautiful, that’s what really matters. How is this shit still happening in 2018? And why did Schumer agree to this script? Her performance is enjoyable but I Feel Pretty pales in comparison to her own creation, Trainwreck, and one can’t help thinking that if Schumer had written this one herself it could have been much, much better.

I Feel Pretty is in cinemas from 19th April through Entertainment One.

Written By
Claire Robson
More from Claire Robson
Anyone who has ever participated in dance should appreciate Olivia Peniston Bird’s...
Read More