Pablo Berger’s latest film is an apt choice to launch this year’s Spanish Film Festival, even if it isn’t Spain’s most impressive output. If you’re familiar with Berger’s glamourous Snow White retelling, Blancaneives (2013), you will know that he doesn’t do things by half and has a rich eye for detail. He is above all a close observer of Spanish life and its obsessions, and whether it is a fairy-tale, social satire, sketch comedy or horror you’re after, Berger as writer and directer isn’t afraid to juggle more than a few balls at a time. It seems inevitable that he would drop a few from time to time, but Abracadabra should be more chaotic than what this splash of genres delivers.

Spanish star Maribel Verdu (who starred in Pan’s Labyrinth, which is also playing this year on closing night in wake of Guillermo de Toro’s resurgence) plays Carmen, a housewife stuck in a loveless marriage to a man more passionate about the soccer than his family. His name is Carlos (Antonio de la Torre). At least it is until Pepe (Jose Mota) – Carmen’s cousin, amateur hypnotist and goof – performs a routine on a mocking Carlos to unexpected ends. Overnight, Carlos the alpha-male turns into the type of husband who cleans and makes breakfast. On the one hand, yay; on the other, who actually is this person? If it’s a ghost, who was it, how did he or she die, and why did it set up shop inside Carlos?

These are just a few of the pressing questions that one might ask, but Abracadabra is not particularly concerned with stopping to listen to the concerns and life stories of its characters, much less answering questions about metaphysical phenomena. Berger’s screenplay bounds from scene to scene with all the energy of a toddler hooked to a drip laced with cordial, following Carmen’s exhaustive search for a solution with a hyperactive lens and the same technicolour palate that you’d find in any Pedro Almodovar film. Even if you were to put homicidal chimpanzees, theatrical real estate agents and disco-dancing psychopaths aside, this would still be one of the stranger satires of Spanish life to grace the screen. 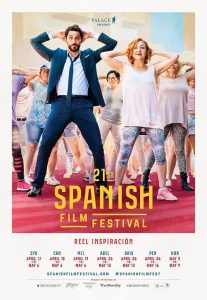 Not content to let his work linger for more than a few seconds, Berger ushers us into a modern-day fairy-tale with dextrous camerawork and a madcap narrative that dashes through his formidable cinematic artillery. Not all of it works. When it does, it’s devilishly effective, as when a real estate inspection of an apartment untouched for decades turns macabre or when Pepe lets on about a camcorder video of an 80s wedding gone terribly wrong. When it doesn’t work, at least it never stagnates. Scenes in a swingers’ apartment and an intensive care ward are more infantile than inspired and would have been easily disposable, but there are a few chuckles to be had at the expense of our own IKEA catalogue obsession.

At only 96 minutes in length, it’s possible these elaborate sketches were necessary padding for an already short film, but a good case could also have been made for devoting that time to Carlos, who is depicted as little more than a puppet. His should be an intriguing character, and while de la Torre is effective as a blank slate for comedic uses, he is wasted. Even with two lots of thoughts inside his head, both of them are given short shrift in favour of his being merely the butt of a long joke.

On the whole, it is more often than not an effective joke and its resolution surprisingly neat, given the journey. That the film at least does most of its best work in the back-half – especially as events turn grisly – is a major plus, propelling this beyond the rather dismissive label of ‘mixed bag’. Carlos and the antithetic Pepe are not Berger’s concern. This is about a woman in need of an escape from the bewildering existence thrust upon her, and to that end Verdu provides the film with a much-needed foothold to prevent it from flying away on Berger’s imaginative streaks.

Abracadabra screens as part of the Spanish Film Festival from 19th April to 6th May.

Reviewer note: Also included in this year’s Spanish Film Festival program is a film that screened and was highly recommended at last year’s event, Summer 1993.