When it’s tempting to moan about how bad we’ve got it with our politicians, it pays to flick over the pages of history for some perspective. Written for the masses, Julius Caesar is ample proof that those bitter dregs of cynicism have been swallowed by plebs like you and I since time immemorial. More often than not, Shakespeare’s plays are examples of how not to deal with your leadership crises. Indeed we have learnt from it, and it is reassuring that our current ruling parties at least consider caucus before murder when deposing a leader. Nonetheless the Bard’s plays are interesting studies in how such scenarios might play out if succession planning goes pear-shaped, and as stage director Nicholas Hytner has found, this play in particular is very adaptable.

A melodramatic blockbuster of its time, Julius Caesar paints the Roman Empire at a crossroads as Senator Cassius (Michelle Fairley) approaches her trusted brother-in-law Brutus (Ben Whishaw) with words to the effect of: ‘We need to talk about Caesar’. To her mind the elderly dictator (David Calder) has let ambition take over his senses, having declared himself dictator in perpetuity. Brutus is hesitant at first. In this incarnation, bent over his books, he carries the worries of a West Wing wonk who is more at home with policy than with rhetoric. But the plan is in motion and Cassius assembles a group of conspirators eager for change. With Brutus’ consent, they agree to an assassination. If you don’t know how it ends, you’d best look up Wikipedia. 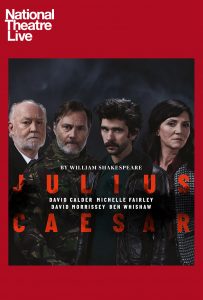 Set in the modern-day, this production draws some not-so-subtle parallels between Caesar and Washington DC but stops short of changing names. With red caps and concert rallies, this is leadership through bluster, boasts and propaganda built on a masculine and military prowess, which is all the more emphasised by Cassius’ casting as a woman. Michelle Fairley brings an earnestness to the role that is as ennobling as it is blinding, and along with Whishaw’s introspective Brutus, who is learned in the nature of dictators, they make a good pair: convinced of their own intentions, aware of their weaknesses but painfully ignorant of how they might be perceived. Such political statements have become commonplace in the National Theatre’s program under Hytner, but a familiar play such as this demands renewed interpretation of the material. Parallels are neatly drawn between the marquee names of Roman history and those of today, and so Hytner taps into a rich vein of protest.

What results is less a reflection of our times than a warning against rash reactions to them. It is a shame that Shakespeare’s plays occasionally suffer from an overt melodrama that overshadows his ideas, but the well-known consequences of Caesar’s assassination provide easy lessons in everything from public relations to political vanity. While similar scenarios have played out over the ages to varying disastrous ends, this rendition of Julius Caesar makes no secret of its target across the Atlantic and does so with some style.

Surrounded by patrons on all sides who double as the populace of Rome, sometimes Cassius and Brutus’ conversations — by far the highlight — don’t seem as discrete as they should be, but this dynamic use of the 360-degree space ensures the production has freedom to enhance its themes in other ways. Stages rise, fall and shift. The play opens to a rock concert before seamlessly transforming to a café setting and then to Brutus’ study, all the while bathed in a darkness fitting to the scant transparency between those on top and those beneath. This is an ambitious ploy. It allows the production space to mimic the rowdy forum of Rome while also providing a sharp focus on the performers who seem to move instinctively rather than half-turned and projecting.

Unfortunately flaws surface in the final act. Once the string of betrayals has been untangled, the battle for interest is a losing one. With guns substituted for swords as havoc is cried and the dogs of war are let slip, the eventual challenge for the actors is to raise their voices above the cacophony. They do their best, but ultimately the final half-hour of strobe-lit gunfire and wailed regrets wastes the talented cast and so too its message.

National Theatre Live: Julius Caesar is in selected cinemas for a limited time from 14th April through Sharmill Films.

Written By
Angus Tonkin
More from Angus Tonkin
The life and death of Vincent Van Gogh has been an obsession...
Read More