It’s quite rare that specialised films made for the American bible belt make their way to Australia. Rarer still that they manage to get a somewhat wide cinema release, yet here we are. Coming to us from the Sony Pictures sub-company Affirm Films just in time for Easter, Paul, Apostle of Christ is the closest thing you’ll find to mainstream evangelical Christian propaganda.

This is the story of St Paul, known at the time as ‘Saul’ (James Faulkner). Set in a prison during the mid-point of the Roman Empire under the tyrannical rule of Nero, Paul is in prison after Christians have begun being persecuted in the Roman Empire. One of the moral leaders of the small sect of Christians who still live in Rome is Luke (Jim Caviezel), who risks his life night after night by going to visit Paul while in prison under the watchful eyes of the prison’s despotic warden (Olivier Martinez).

Before converting to Christianity Paul had been an Orthodox Jew who hunted down any follower of Christ but had a sudden and rather abrupt change of heart when Jesus spoke to him in a vision and turned his heart to God. Or to put it another way: he completely changed his personality and behaviour because there were voices in his head telling him to do things. Christians may call this the Holy Spirit; in the modern world it’s known as schizophrenic insanity.

Full disclosure: This is being written by a committed atheist. So with that bias freely admitted the question then becomes: does it work as a film regardless of its very bias foundation? Absolutely not. This is not only a genuinely terrible film but a strange snapshot of how modern evangelical Christianity sees itself. 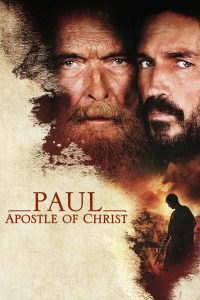 Now that the world knows a few things about science and reason the church is finding out that more and more people are falling away from its ranks (the systematic cover-up of the mass occurrence of child rape might have something to do with it as well). Because less people are taking the bible literally and base their worldview and morals on things other than one book written 2000 years ago in the less civilised parts of the Middle East, many of the more fundamentalist Christians interpret this as being persecuted. The same people who think there’s a  ‘War on Christmas’ because a few people now say ‘Happy Holidays’ are the same people who could watch this film with a straight face.

The performances range from bland to horrible. The plot is slow and boring; more than one person nodded off and started snoring loudly during my screening. The production design is shoddy and the villains act like the bad guys from cut-price Saturday morning cartoons – including one who manages to act despite having one of the worst hairpieces ever made glued to his scalp. Cinematography is awful as well, to the point of having entire scenes not focused properly, so it looks like you accidentally picked up someone else’s glasses.

It’s interesting that this and Mary Magdalene come out in the same fortnight. Did some massive evangelical revival happen while I wasn’t looking? The two make for an interesting comparison. For all its faults Mary Magdalene did have some creative filmmaking behind the production. It had artistic and historic merit as it tried to add something new to the story of Christ. Paul, Apostle of Christ has all the depth of something written by a five-year-old for a Sunday school creative writing course. Without a word of hyperbole: The Life of Brian has more depth and intelligence, and frankly a better message, than this.

It’s hard to think of even one thing worth defending. Seriously, I’m sitting at my desk scratching my head and trying, in the interest of fairness and good sportsmanship, to find something to praise amid this torrent of blasphemous rage… Jim Caviezel’s beard is quite nice I suppose; the guy can grow a finely trimmed cheek warmer like no one else. He was excellent in The Count of Monte Cristo and had quite a nice beard in Passion of the Christ too – and that’s the only time the word ‘nice’ comes within 100 kilometres of that film. So there you go: You should see Paul, Apostle of Christ if you’re in my niche but passionate fanbase of Jim Caviezel’s facial hair.

The market for dogmatic Christianity might enjoy it, as they let this piece of lifeless propaganda convince them they’re somehow the victims of persecution in the modern world. But if you’re not religious this is like being slowly lobotomised over 100 excruciating minutes.

Paul, Apostle of Christ is in cinemas from 29th March through Sony Pictures.

Written By
Simon Storey
More from Simon Storey
Maria Callas, the beautiful Greek-American soprano, is a name familiar to anyone...
Read More