Going by her works in the past five years Ava DuVernay has to be one of the greatest American directors currently working. Selma is a bonafide masterpiece and her follow up 13th ranks as one of the most important documentaries of the 21st century. A Wrinkle in Time is, hopefully, just an unfortunate blip on her stellar filmography, because despite having only the best intentions this is a really awkward, disappointing misfire.

Based on the book from 1962, this is the story of Meg (Storm Reid) a thirteen-year-old African American girl trying her best to act and do well at school despite never getting over her father’s (Chris Pine) disappearance several years ago as he was studying his groundbreaking work on astrophysics. Abandonment, bullying and sadness are the main factors in Meg’s life, but things take a drastic turn when her little brother Charles Wallace (Deric McCabe) welcomes a rather peculiar stranger into their home. This is Mrs. Whatsit (Reese Witherspoon), who along with Mrs. Who (Mindy Kaling) and Mrs. Which (Oprah Winfrey) are travellers from beyond the furthest stars, who are here to help Meg, Charles Wallace and her friend Calvin (Levi Miller) travel the galaxy and find out what happened to her father.

A Wrinkle in Time is at the very least a triumph when it comes to progressive filmmaking. This marks the first time that a woman of colour has directed a film with a budget over $100 million, which is proving once again that Disney have put their money where their mouth is; they truly are at the vanguard of inclusive change happening in mainstream filmmaking. 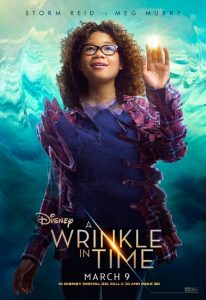 The visual inventiveness is stunning. Vibrant colours with really unorthodox costumes and make-up make this one of the most original looking films in a very long time. The future cosplays of these characters will be quite the sight. Any film that contains a ten-foot-tall Oprah wearing a dress that looks like it was created by an acid trip in an op-shop has earned it’s place in pop culture.

DuVernay has made no secret that this was made primarily for an audience of 8-12 year olds. It’s worth noting that this is one of the few mainstream mega-budget films that has a cast made primarily of non-white actors and characters, so this could be a real treat for any young person of colour who is just starting to go to the cinema. This isn’t pandering to the market of teenage boys; this is for any little girl who dreamed of seeing herself on the big screen.

The other thing worth noting is that the message is so starry-eyed wholesome that anyone older than sixteen might find it naïve. In the current apocalyptic hellscape that is internet culture it’s hard to go five minutes without hearing someone use “SJW” (Social Justice Warrior) as an insult. This started off as a half-decent attempt to call out the hypocrisies and the continuously moving goalposts within the uber-progressive millennial movement that is just starting to come into its own, but has now been so categorically overused that it’s been robbed of any meaning, a bit how the words ‘oppression’, ‘nazi’ and ‘racist’ don’t carry the same weight that they did five years ago. At this point SJW is levelled against anyone who is to the political left of Sauron – and this is a film that doesn’t care one iota if it gets called that. It champions compassion, respect and inclusiveness, which for an older audience seems silly but for its target audience is one of the best things that can be taught. It will be very interesting to watch this in ten years to see how it’s aged.

Its ambitions well exceed its success and young audience might get a lot out of this but for an older audience it all seems a bit naive and candied. This is DuVernay’s first blunder as a director, and it’s a very well-meaning mess.

A Wrinkle in Time is in cinemas from 29th March through Disney.

Written By
Simon Storey
More from Simon Storey
For some reason a lot of Australian cinema has a problem with...
Read More