Nick Park, legendary stop motion genius behind Wallace and Gromit and the Aardman studio gives us his latest feature since 2005’s The Curse of the Were-Rabbit. The opening card to his latest feature, Early Man, informs we are in the neo-pleistocene age somewhere near Manchester, in an era in which clay cave men and dinosaurs co-habit in a hilarious throwback to films like one million years BC.

The age isn’t set to last long, however, after a comet falls from the sky, presumably wiping out the dinosaurs and leaving behind a dodecahedron-shaped ball for the cave men to find. They begin to kick the ball around in curiosity and it’s not long until everyone’s enjoying a nice game of early soccer, the Manchester reference now making sense (though personally I would have set it in Liverpool).

This small opening comes to an end with opening credits and then it’s a few ages later, where a new era of very slightly more technological adept early man begins . Eddie Redmayne is the film’s protagonist Dug. He is joined by a few other members of his tribe including leader Chief Bobnar (Timothy Spall) and Treebor (Richard Ayoade’s nasally voice coming hilariously from an overgrown mummy’s boy). The characters sit well within the Aardman pantheon of delightfully eccentric British characters. 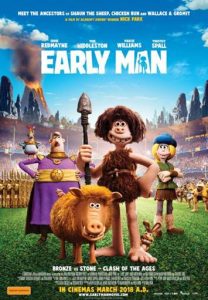 The rabbit hunting tribe’s good times come to an abrupt halt when Lord Nooth (Tom Hiddleston) enters in a bronze robot and annexes their land for a giant mine to be built. Hiddleston voices the hook-nosed Nooth very humorously with a dripping thick French accent. In response Dug travels to their ancient Roman-esque society, and in the Colosseum boldly challenges their star soccer team to a game, where winner keeps their land. It’s not clear what Nooth has to lose considering he already has control of the land, but he accepts and so ensues the bulk of the film, a sports genre, winner takes it all underdog tale.

The tribe get a ring in and Dug gets a potential romance with Goona (Maisie Williams) who takes pity on Dug, leaving her city to help train their rag tag tribe. The puns and gags slowly burn out at this point and the plot becomes so formulaic even the youngest members of the audience will find this stale. Considering the notoriously enormous work that goes into stop motion filmmaking it’s disappointing that the inventive characters haven’t been accompanied by an inventive plot. Indeed the film’s marketing, sensing such, is totally devoid of any of the soccer references. One is left to wonder if this was a script rushed into production in time for the hype of the World Cup.

The film has an ending Stevie Wonder could see coming, compounding this problem are character decisions that make such little sense you would almost classify them as plot holes. Aardman films have a reputation of being enjoyed by child and adult alike. This is a disappointing miss for the adults at least. The slapstick and visual gags are the redeeming factors of this film, but aren’t at the same high level one can expect of Aardman Animations. With glimpses of eccentrics and gags of Park’s genius here and there, Early Man is unfortunately more miss than hit.

Early Man is in cinemas from 29th March through Studiocanal.

Written By
Ben Isbel
More from Ben Isbel
Twenty years since the 1996 heroics of Will Smith, the aliens have returned to Earth...
Read More