With Easter around the corner, it’s only fair that we get to watch a film tribute to Easter eggs. I’m talking about the pop culture kind, of course – the sneaky additions to a video game or film that credit a creator, reference an influence or make a gag. Their purpose is often to reward savvy fans, giving the most obsessed followers something extra to savour.

Ernest Cline, the author of the novel on the which the film is based, does not only litter Ready Player One with Easter eggs, but makes them the central plot point of his story, set in a future reality that’s both dystopian and utopian. On one hand, urban poverty is rife. Yet seemingly universal access to virtual reality and the OASIS console makes it possible for everyday people to literally be whomever they want and go wherever they want.

This contrast is articulated through the character of Wade Watts and his alter ego Parzival (Tye Sheridan), an adolescent orphan who spends most of his day earning coins in OASIS and trying to unlock the multi-billion-dollar inheritance of its pop-culture obsessed creator James Halliday (Mark Rylance).  The only way to access this inheritance is by interpreting Halliday’s pop-culture-inspired cryptic clues and deciphering the Easter eggs Halliday left throughout his life. 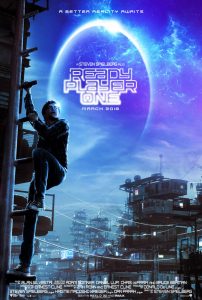 The quest to win Halliday’s fortune is the vehicle that drives the narrative forward and it’s through this that we meet Parzival’s virtual friends and the menacing capitalistic empire of IOI, run by Nolan Sorrento (a role well suited to Ben Mendelsohn). But the real fun in the film, directed by Steven Spielberg and adapted for the screen by Zak Penn and author Ernest Cline, is the journey itself and the countless references made to the ‘80s and ‘90s. Classic songs from Van Halen, A-Ha, Depeche Mode, and Hall and Oates set the tone for an energetic blast from the past as Wade and his avatar sidekicks navigate their way past video game heroes, film villains, and classic movie references. No scene does this better than a 5-minute detour through the set of The Shining, a picture-perfect tribute that should delight even the hardest-to-please Kubrick fan.

A cynic might infer that most of the references hark back to Spielberg’s heyday as an adventure auteur and that potentially this is a ploy to make audiences nostalgic of his past works. Or perhaps they might point to the success of Stranger Things and Guardians of the Galaxy and accuse him of using Ready Player One to jump aboard a moving train. Both are valid points of view, but neither can take away from what Spielberg, Penn and Cline are able to achieve with Ready Player One, which raises the bar with its innovative world building, sensory overload visuals and benchmark special effects. With a film this dense, there’s enough Easter eggs for everybody and it’s difficult not to be emotionally affected by the savvy reminders of the things we used to love.

With our emotions primed, the filmmakers make us feel invested in their characters and willing to excuse some of the more predictable and clichéd elements of the story – namely the token romance and the endless action scenes. What also helps is that Spielberg is a master storyteller and the quest genre is his bread and butter. By giving us a likeable protagonist, a despicable enemy, and a fantastical adventure, we are not only reminded us of his former strengths but that he’s also still got it.

Ready Player One is in cinemas from 29 March through Roadshow Films.

Written By
Kevin Hawkins
More from Kevin Hawkins
Queen is about to sell a lot of albums again, or whatever...
Read More