The man who gave us The Thick of It and Veep strikes comedy gold again with his latest feature. Armando Iannucci, one of the greatest satirical intellects of contemporary times, turns his comedic eye towards the political calamity in Russia in the immediate events following the death of cult figure, Joseph Stalin.

The opening of the film deftly foreshadows the tone of comedy you can expect. A Moscow radio station is broadcasting live an orchestra of Mozart’s works. Stalin (Adrian McLoughlin) rings in to ask for a recording to be sent to him. What follows is an absolute farce.

Panic hits when the producer realises they had not recorded the concert. The conductor passes out in sheer terror, leaving the secret police to kidnap the next best conductor in Moscow, who initially thinks he is being sent to prison or executed. People are rounded up off the street to replace the live audience and the doors are locked. A repeat of the performance is recorded and then rushed to the guards sent from Stalin’s residence, who let the disheveled producer know that the lateness it is being received will be officially noted. 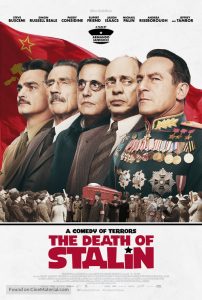 What this does is speak to the fearsome reputation Stalin had at the top of a system of government that has no qualms torturing or killing its citizens over the most banal or mundane grievances. It’s this same terror that leaves his most senior ministers in a state of temporary paralysis and panic when Stalin croaks soon after.

What ensues is a cloak and dagger power struggle in the immense vacuum left by the beloved tyrant. Ostensibly leading that race is Lavrenti Beria (Simon Russell Beale), the man in charge of the gulags and secret police. He mentors Georgy Malenkov (Jeffrey Tambor) to be the rightful temporary head of the party. The wry Nikita Khrushchev (Steve Buscemi) anticipates Beria’s attempts at shoring up power and counters by allying himself to senior members of the party. Buscemi is back to his quirky best turning the unlikely antagonist Khrushchev into a likable character. Tambor also shines as the bumbling and paranoid heir apparent.

The humour in the film is top quality; clever and universal all at once. There is plenty of dryness and understated irreverence that one can expect. After Stalin’s stroke Berias sends a woman out to the city in search of a doctor to assess Stalin (nearly impossible as he himself executed ‘all the good ones’). Tambor in a state of nerves asks “What if it goes wrong?”  “Then we Shoot her” is the abrupt reply. “Yes. That would work”, Tambor replies relieved.

Simply put this is hysterically funny with plenty of gut-busting laughs. At one point I laughed so hard I drooled a little. The inventive profanities found in Iannucci’s British creations are more lacking in this tale, which can be explained by the absent chronies and sychophants within the screenplay. Rupert Friend as Vasily, Stalin’s alcoholic son, is a revelation and scene stealer amongst the veterans. His comedy is a little more slapstick and on the nose, but expect any scene he is in to leave you in a fit of giggles.

Farcical and irreverent The Death of Stalin shows that our emperors wake up just as naked as we do, with all the same flaws and their own peculiarities. Political satires can often be retaliatory: Dr Strangelove to the cold war and Team America: World Police to the post 2001 environment. It will be interesting to revisit this one with hindsight and find out if Iannucci is foreshadowing, reacting, or simply found a political moment too good not to lampoon. Regardless, his mantra, if you don’t laugh you’ll cry, is always a welcoming one in any political climate.

The Death of Stalin is in cinemas from 29th March through Madman Films.