There has not been a directorial debut in recent years as calmly assured as Columbus. Director and writer Kogonada, perhaps best known for his video essays on film, has made a seamless transition with his first feature – and the results are stunning. In the spirit of Richard Linklater’s Before Trilogy, but with a mood distinctly its own, the film focuses on two strangers as they meet and come to know each other in Columbus, Indiana, known for its modernist architecture. The naturalistic performances, screenplay and cinematography come together beautifully to create a delightful, captivating snapshot of two people who unexpectedly connect. This film is a small gem – sensitive and mesmerising – taking its time to explore human relationships that never feels dull or mundane.

A renowned architecture scholar collapses before he is scheduled to give a public talk at Columbus. His son Jin (John Cho) flies over from South Korea. He meets up with Eleanor (Parker Posey), one of his father’s former graduate students and current assistant, whom he had feelings for when he was a teenager. Jin happens to meet Casey (Haley Lu Richardson), a recent high school graduate with an interest in architecture. Whilst many of her friends have left to go to college, she chooses to remain in Columbus to care for her mother, a recovering drug addict. Over the course of several conversations they talk about the town’s architecture, about their relationships with their parents, and about their futures. 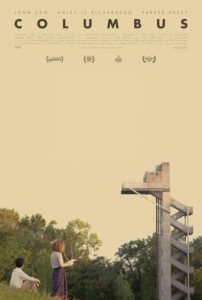 It is refreshing to see a film interested in following characters and seeing them get to know each other with seemingly no ulterior motive, romantic or otherwise. There is a beguiling grace to their unfolding relationship. Their performances are quietly absorbing and lived in – and all the more authentic because of it. It is rare to see Cho (or frankly, any Asian-American) in a serious leading role, but he’s a natural. He projects a calming confidence, tempered by a resigned ambivalence about his distant relationship with his father. And Richardson is an inspired revelation. She grounds her portrayal with a self-possessed maturity, but she nevertheless hints at the self-doubt and yearning for more beneath the surface.

Much of this chemistry derives from the screenplay. There are some broad similarities to the Before Trilogy, but overall it adopts a more understated approach. The exchanges may appear banal, and there are often silences. But this is intentional – it compels us to pay attention. In its assured pacing, the screenplay shows respect for the characters’ privacy, but nevertheless generously creates ‘little spaces’ so that they feel fleshed out despite the screenplay’s refusal to fully expose or explain them.

Elisha Christian’s complementary cinematography is serenely stunning. She constructs her shots with such poise and clarity that they create an arresting stillness. They seem to thrive on contrasts – distant yet inviting, calculated in their straight lines yet exuding warmth. Shots of characters by themselves, observant but not intrusive, invite speculation about their inner lives. This is a film invested in spaces – physical and psychological, interior and exterior – and the ways in which they subtly reflect and reciprocate each other.

Columbus is a minimalist reverie. It is less interested in imposing a particular message onto its audience, and instead creates the possibilities – latent in moments – for feelings, insights and revelations to emerge (or not). It is up to us to meet it halfway. But if we do, it is a quietly moving experience. The film, through its asymmetrical but balanced visual poetry, prompts us to see sheer life in the everyday. And because of its astute sensitivity and humanity, its warmth and depth and sublime subtlety, it is a small wonder.

Columbus will screen as part of the American Essentials Festival 10th to 18th May 2018.

Written By
Dan Santos
More from Dan Santos
Reprising his role in Riddick, the third instalment of the franchise, is...
Read More