Writing and producing partners Aaron Moorhead and Justin Benson return to our screens after 2014’s Spring with The Endless. It’s an interesting horror film which was clearly thought up while reading the works of H.P. Lovecraft and gives us another delicious slice of low budget indie filmmaking.

Years ago brothers Aaron and Justin (Moorhead and Benson) escaped from a cult. They’ve been living back in society for a few years, scraping out a living by cleaning houses and living fairly innocuous lives. After getting an invitation to come back they have a decision to make. Aaron, the youngest brother, was just a young man when they left and still has nostalgia for the place where he spent his youth. He convinces Justin to take them back to the camp, just for a trip back to see how everyone is doing. What they find is like summer camp crossed with the family from Martha Marcy May Marlene, smiling faces that seem to hide a secret that everyone knows, the kind of place where if someone offers you a drink of Kool-Aid you know to start sprinting in the other direction. Before they even arrive weird things start happening; birds are perpetually hovering over the campsite and no one there has aged a day since they left over a decade ago. They soon decide to leave, before the camp starts sacrificing goats and chanting “Cthulhu fhtagn!” 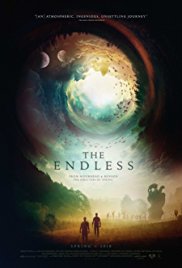 Moorhead and Benson have crafted their own little niche market in the American indie scene. Between them they wrote, directed, edited, distributed, shot and acted in the film, which is a Herculean effort considering they had a budget of under $1M. They’re darlings of the Tribeca Film Festival, and they should be an inspiration to all of us who have aspirations of one day being filmmakers.

If nothing else The Endless is a treat for those of us who like cosmic horror. This was made by people who love this sub-genre and it shows. As opposed to other kinds kinds of horror, which try to create the fear response by showing you things meant to revolt and disturb, ideally making your response that of the characters, cosmic horror relies on ideas and concepts beyond the scope of understanding. ‘That which man was not meant to know’ is its usual one sentence summary. The fear of what we don’t know usually trumps the fear of what we do, and this genre which was pioneered and arguably perfected by Lovecraft is always a treat when it’s done well.

The low budget does show, but it’s made up for by the decent script and performances. The duo at the heart of the film know how to make up for their lack of funds and it’s heartening to observe that a lot of low budget films are much more effective than their blockbuster counterparts.

There’s enough subject material here to make a second watch worthwhile. The monster at the heart of this story is left tantalisingly open to interpretation, and if read a certain way it makes for a very intelligent and creepy outcome. The Endless is much more than the sum its parts and it’s always good when low budget films like this find their audience – horror fans, to the cinema!

The Endless is in cinemas from 22nd March through Umbrella Entertainment.

Written By
Simon Storey
More from Simon Storey
There’s a saying that gets thrown around when discussing world poverty that...
Read More