At the start of Pacific Rim: Uprising, our hero Jake Pentecost (John Boyega) proclaims, “I am not my father’s son”. A similar sentiment could not be expressed for this sequel to 2013’s Pacific Rim, which is every bit the reanimated spawn from the pools of Guillermo del Toro’s indulgence. As Oscar wins tend to do, del Toro’s triumph for The Shape of Water is just enough for us to reconsider what we thought of his back catalogue. If he’s such a celebrated director, maybe there was more to Pacific Rim to warrant a sequel? Well, it did take the end of the world away from New York for once and the idea of a pan-Pacific alliance does look ambitiously fanciful in this day and age – but no, not really. It’s robots fighting monsters. You got it the first time. We’re just here to have fun. And while del Toro is not directing again, his successor Steven S. DeKnight knows the score well.

In the first film, an invasion of giant aliens through an interdimensional breach in the Pacific Ocean brought everyone in the Pacific region together. Their resolution was to play Power Rangers and engage the aliens, called Kaiju, in hand-to-hand combat using equally giant robots called jaegers. As a result of that overlong headache of a film, the breach was sealed thanks to a suicide mission by Stacker Pentecost (Idris Elba) and the world was returned to safety. But was it? Considering the clean-up, it certainly hasn’t been all fun and games since.

Or rather it has for Jake and that’s the problem. Son of that same Pentecost and with big shoes to fill, he has been neglecting his duties as a jaeger pilot to get rich selling parts on the black market. That doesn’t last long. When he is arrested, he is given a choice by his adoptive sister Mako Mori (Rinko Kikuchi) to redeem himself or go to prison. Not a complete idiot, he opts to be redeployed in the Pan-Pacific Defence Corps as a jaeger pilot instructor. The PPDC need his talent now more than ever, especially given the threat that is growing for their program. A Shanghai-based mechanics firm is looking to send the jaeger fleet into a new age of drone piloting using Kaiju DNA. Mori has a bad feeling about it – that and the rogue jaeger that is on the loose blowing shit up. 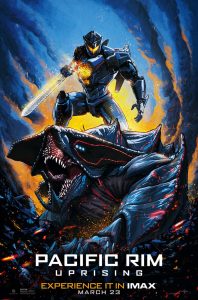 Of course it’s all nuts, but Uprising is well aware of that. Boyega brings his likeable brand of brashness fresh from the Star Wars franchise. He swaggers, he’s not afraid to crack a joke at a bad time, and he sets the perfect tone for a few carefree hours. Thanks to him and a potted two-minute history that contains all the exposition one needs to hear, even at 110 minutes it flies by at a cracking pace. In many ways the crew of Uprising just continue the del Toro’s fun without changing the formula too much. Charlie Day and Burn Gorman reprise their geek bromance from the original, while Boyega develops a nice back-and-forth rapport with fellow arrestee Amara, a young scrapper turned pilot cadet played by impressive newcomer Cailee Spaeny. No-one’s particularly personable, but they’re mostly appealing.

Not afraid to get a little cheesy, Uprising is immensely enjoyable, probably more so than the original. Perhaps the biggest difference, predictably, is stylistic. Del Toro’s design imprint is still in evidence, but this production feels slicker than its predecessor, its dialogue snappier, funnier and to the point, unencumbered by butchered Australian accents and lethargic underwater battles. For this we’ll give DeKnight and his handful of writers – Emily Carmichael, Kira Snyder and T.S. Nowlin – a pass mark. What results is less disorienting and more accommodating to the 3D experience.

I know it’s juvenile but I’m a particular fan of DeKnight’s preference to film the climax in central Tokyo in broad daylight as opposed to the bottom of the ocean. Granted it’s strange not to see Godzilla getting up and about for a fight on his own turf, but there’s nothing like the perspective of an evacuated high-rise business district for watching monsters going troppo. Of course that’s just personal preference.

Pacific Rim: Uprising is in cinemas from 22nd March through Universal Pictures.

Written By
Angus Tonkin
More from Angus Tonkin
"Mrs Brown says that in London everyone is different, and that means...
Read More