Of course not; it was 1908 when Victoria became the last Australian state to grant womens suffrage. But what about those backwards/religious nations like Saudi Arabia (2015), UAE (2006), Kazakhstan (1993), Iran (1963) or even the Vatican City (the only nation not allowing women to vote). Socially progressive Switzerland doesn’t seem like it would have much in common with these countries but amazingly the neutral nation was one of the last in the world to give women a right to vote. It was only in 1991 that the last Swiss canton of Appenzell Innerrhoden begrudgingly followed suit with the rest of the nation.

You’ll need to travel back one full score to 1971 to find the first Swiss canton to grant equal suffrage. And it’s during this time within a rural town that the film takes place. Nora (Marie Leuenberger) is your typical Swiss house-frau. She dresses moderately, cycles around the village, and happily maintains the highly male household, consisting of husband Hans (Maximillian Simonischek), their two sons, and Hans’ domineering and chauvinistic father. 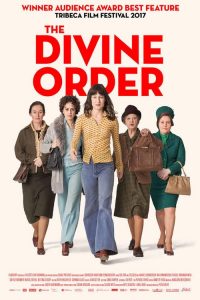 While Hans is away for work Nora half stumbles, and is half drawn into the small local movement for women’s suffrage. Small doesn’t do it justice; the movement is just her reluctant sister in law (who is beaten by her husband), an Italian proprietor recently divorced from her husband, and an older village matron, Vroni, filled with venom at the state who robbed her of her business after a divorce. She emerges from this little activist group as the face for women’s suffrage within the traditional township.

Her journey from house frau to political activist is the body of the film and is a realistic and engaging one. The weight of the film rests on the shoulders of Leunberger, and luckily she delivers. Looking a little like a saxon Jennifer Lawrence, Marie is likewise just as talented and capable of carrying a film as her American doppelgänger. The other characters within her family and her village are also well written and constructed. What makes the film so engrossing is that the ancillary and antagonist characters are ‘real’ people. They’re misguided and on the wrong side of history but they aren’t bad. Even when things come to a head with her husband, who is furious at her participation with the suffrage movement, it’s hard to dislike him; the character is well written and balanced.

Proving that sometimes the political and personal are impossible to cleave, Nora’s political transformation coincides with a sexual blossoming. This is embodied perfectly when Hans asks his wife why all of a sudden she’s interested in this rubbish. After seeing her own vagina for the first time and shown a chart of animals to correspond with vulvas, Nora’s response is one of the highlights of the entire feature: ‘There is a tiger between my legs. And you have never given me an orgasm’.

This historical and political shapshot loses some of its sting towards the end of the feature. It’s fairly obvious where things will end after Nora’s personal journey hits its 180th degree. Besides a slightly stale, jubilant ending the bulk of the feature is full of passion and the kind of political inspiration and engagement usually reserved for Bachelor university students.

The Divine Order is in cinemas from 22nd March through Rialto Distribution.

Written By
Ben Isbel
More from Ben Isbel
The fourth instalment of the Insidious franchise returns eight years since the...
Read More