To recount what actually happened in the original Tomb Raider film is a tough ask. Never mind that it rates 20% on Rotten Tomatoes, that it was cheesy and lifeless, and that its main aim was merely to ogle at its star. As far as the studio was concerned, it did its job. It left a lasting image of Angelina Jolie in spandex to haunt the filler hours of free-to-air TV for years to come. Today those films with their surprisingly well lit tombs look rather tired. So is it time for a reboot? It’s as good a time as any, what with the recent success of Wonder Woman. But is Roar Uthaug’s reboot necessary? Probably not.

Lara (Alicia Vikander) has never been a particularly interesting character. She is an heiress to the Croft empire developed by her father (Dominic West) who, while mostly absent during her upbringing due to his mysterious adventures, eventually went completely missing when she was but a teen. This seems to have left a bitter aftertaste. Shunning the fortune she stands to inherit in favour of earning her own, Lara is less a femme fatale than a plucky brawler when we meet her, only just getting by as a bike courier and struggling to pay for the gym where she practises MMA. However, faced with accepting both her father’s demise and her resulting inheritance, she still finds unlikely the concept that he would just vanish and not leave some kind of explanation.

Her instincts are good. Indeed her father has left clues for her eyes only, owing to the gravity of his last known assignment. All the answers seemingly lie in a box of information in his secret hideout about a so-called curse of Himiko — a box he has expressly instructed Lara to destroy without hesitation. But when you tell someone not to look, of course they are going to.  The guy really was an idiot. In any case, she looks and sets off for the last place to which her father was bound, a treacherous island off the coast of Japan said to have been Himiko’s resting place. 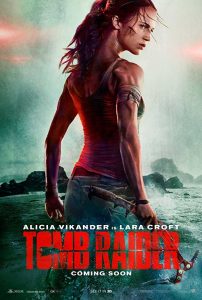 Vikander’s Croft is determined to be defined by grit, and it is a welcome change. She has the acting chops to raise a potboiler like this above its station. She is also physically more than equal to the role. Doing all the stunts not taken by CGI, she is pummelled by trees, kicked in the head, thrown against rocks and hit by cars. And for much of the rest of the film, my friend who accompanied me observed, Croft is either hanging for life or fleeing collapsing floors. That she isn’t one to stop and chat can probably be forgiven. But this dearth of authentic conversation does seem a shame, given Vikander’s charisma and the dire of lack of chemistry between any of the cast. The film could also have used a few more laughs courtesy of its leads rather than outsourcing its gags to cameos from Nick Frost.

On the other hand, the screenplay by Geneva Robertson-Dworet and Alastair Siddons is so frequently silly and underdone that the cast is probably thankful that the brunt of the exposition is borne by West. Lord Croft’s narrated set-up of the dreaded curse of Himiko is so earnestly and laughably the stuff of teen fantasy that it undercuts any veil of tension that might accompany the consequences of the curse’s release. Evidently those who can suspend their disbelief and keep their tongues in cheek will be rewarded. A tomb will be raided, false tiles will trigger traps and characters will make inexplicably dumb choices as an excuse for making their escape all the more spectacular. It’s just how it is.

If you let those qualms through to the keeper, then Tomb Raider will be quite brainlessly enjoyable, and with that kind of action you could say the plot is unimportant. The writers responsible for it, however, should not. The film is immensely improved with Vikander taking the lead, but you can’t reboot a franchise solely on the reputations of cast and character, just as you can’t borrow so liberally from the likes of Indiana Jones and expect people not to notice.

Tomb Raider is in cinemas from 15th March through Roadshow Films.

Written By
Angus Tonkin
More from Angus Tonkin
This may not be the first film to be shot entirely on...
Read More