Karl Marx. A name that inspires equal amounts of fervent respect and spiteful hatred, depending on which group you’re talking to. A genius of philosophy and economic analysis, there can’t be many people who have had a greater impact on human thought than this bearded genius.

The latest offering from National Theatre, the first of many excellent showings in 2018, is a comedy set in 1850. Capitalism is just starting to get going, the divide between rich and poor, the powerful and the exploited is rapidly skewing out of control. It’s in this social miasma that a 32 year old German refugee lives in London with his wife and readily growing family.

Directed by Nicholas Hytner and staring the underrated Rory Kinnear as the titular intellect, Young Marx is an engaging and thoroughly entertaining show. This was the first play to ever be produced in the newly erected Bridge Theatre in London; it’s a great way to start. Playwrights Richard Bean and Clive Coleman have teamed up on the script, a mix of comedy and history mixed in with a little social analysis.

Kinnear is excellent in the lead, and as an added bonus he actually looks a bit like his real life counterpart. Marx is a great subject to play around with, partly due to being so popular but also one who is also quite bizarre. At this stage in his career he was nothing more than a pudgy intellectual who was making enemies in the – at the time – tiny debating society who called themselves Communists. He was overweight, a drunk, a spendthrift and almost completely emotionally illiterate. His skills in analysis of society were simply unparalleled but he also procrastinated and annoyed a lot of people. 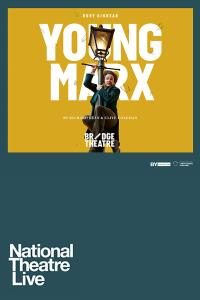 The person he aggrieved the most was his wife Jenny von Westphalen (Nancy Carroll). One of the oddities of Marx’s life – one full of oddities – was that he married into Scottish aristocracy; his wife was the heir to the Argyll dynasty.

Then there was his writing partner, drinking buddy and best friend Friedrich Engels (Oliver Chris). Engels came from a business family in Manchester. He was a very rich man and seemed like an odd fit to the world of class revolution. Oliver Chris is one of the best things in the play, previously having been in the NT production of Twelve Night. Engels is a very interesting player in the course of Marxism, and one of the great contradictions of history is that Engels eventually went back to the textile factory and made a fortune. He then used it to cover Marx’s debts and paid him to finally complete Das Kapital, which he had procrastinated writing for five years – capitalism paid for communism. However, the play leaves out the fact that Marx and Engels ended up writing adoring poetry about each other, which seems like  such a peculiar bromance it’s crying out for a biopic.

The early life of Karl Marx is one so bizarre it serves as the brilliant template for a play. Marx is a controversial figure but one who had some undeniably profound insights into the human condition. This is a play which educates and makes you think, a perfect match for the theatre.

The performances are wonderful, the writing is sharp, the humour connects and the subject matter is fascinating. Yet another excellent play gifted to us from those at National Theatre.

NT Live: Young Marx is in cinemas for a limited time from 17th March through Sharmill Films.

Written By
Simon Storey
More from Simon Storey
Based on the book by Lawrence Wright and directed by Alex Gibney,...
Read More