Think of Australia and you think of the kangaroo. A creature that was on this country 250,000 years before Indigenous Australians, an animal with such a unique evolutionary line there’s nothing quite like it anywhere else on earth. Yet as much as this country loves its icon, the way they’re treated as pests tells a very different story. This is the contradiction at the heart of Kangaroo: A Love-Hate Story by husband and wife documentary team Michael McIntyre and Kate McIntyre-Clere.

This is a exposé of the Kangaroo industry from culling to meat export, and the message is clear: this has to be one of the most wasteful and inhumane industries current operating in Australia. For this reason it’s already causing controversy, as farmers and industry members are digging their heels in and slamming this as a “beat up”.

Full disclosure: I’m a vegetarian from inner-suburban Melbourne who leans left and drinks a lot of soy lattes. Basically, the kind of creature that conservatives and Bolt Report viewers tell stories about at night to try and scare children, so if you’re looking for an opinion that wasn’t already on board going in, look elsewhere. This was preaching to the congregation, and it totally worked. 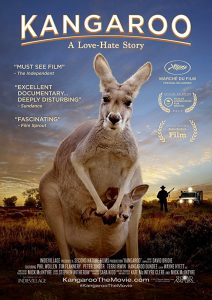 What is revealed is as shocking as it is depressing. We open with handheld footage taken of a roo shoot which wouldn’t look out of place in a found-footage horror film. This is the basis of everything that transpires, as the industry and the international deals all spring from scenes where kangaroos are killed in increasingly horrific ways. In the interest of fairness there are farmers and abattoir workers interviewed but it’s very hard to walk away from this experience not being disgusted.

The many talking head interviews are mainly taken with politicians. Mark Pearson from the NSW Animal Justice Party is a focus, as he is the first politician from the party to be elected to a legislative body. Many of the A-List animal rights campaigners make appearances from Peter Singer to even Terri Irwin.

In a city as progressive as Melbourne where Animal Rights and Veganism are literally plastered around the streets, Kangaroo is going to find a very dedicated and passionate audience. The challenge here is to try and get it to a wider audience, not just those in the inner city bubble who undeniably have little appreciation for the life and hard work of farmers and pest controllers.

While it does slip into basic manipulation and plays every card that it knows will resonate with me and my fellow bleeding heart lefty comrades, the message is important. No one is suggesting that kangaroos are going extinct, but what is for sure is that this industry, just like every meat industry, is built on secrets, bloodshed and suffering beyond the scope of a civilised mind.

This is an exposé as important as Blackfish or The Cove. It’s a sad and painful part of this nation and it deserves to come into the limelight.

Kangaroo is in cinemas from 15th March through IV.

Written By
Simon Storey
More from Simon Storey
The largest city in the Gujarat region is Amdavad. In the west...
Read More