Directed by James Marsh, The Mercy is the story of Donald Crowhurst (Colin Firth), an amateur sailor who likes to head out on the water with his wife Clare (Rachel Weisz) and children at the weekend. As an inventor and businessman, Donald has had quite limited success. His sailing navigation gadgets are not selling well. On a drunken whim, Donald decides to join a newspaper sponsored boat race, ‘The Golden Globe’. The requirement is to sail around the world, single-handedly, without stopping. Donald plans to design and build his own boat for the trip, hoping that his adventure will inspire sales of his inventions, bring him some glory, and that the prize money will help him support his family.

As the departure deadline looms, Donald is less and less prepared. His financial backers have sunk too much money into his boat to let him back out, and he must sail out in a barely sea-worthy vessel. He is now a local celebrity, the townsfolk in his sea-side village are beside themselves with glee at the prospect of their local man made good as an intrepid sailor. Donald’s wife Clare and their children are invested in Donald’s adventure, more so than they realise as Donald has covertly mortgaged the house and business to fund the trip. 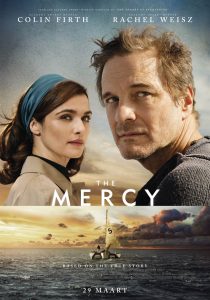 Once out on the open water, Donald must face the reality of his choices. The boat was never properly finished, let alone tested, and he has a constant list of chores to keep it functional – before he even addresses the challenges of his journey. Promoted for its speed, Donald’s boat barely seems to move beyond a snail’s pace – he is quickly well behind everyone else in the race, with no way to catch up. Donald begins a move to deception of his land-based crew, followed by a descent into madness.

The Mercy is beautifully filmed, it is well acted, well produced – there is little to fault in the film. Except for its pointlessness. Even without an inkling of the backstory, there is a sense of ominousness from the outset of the film. Colin Firth gives Donald a foolhardy optimism, but it is clear that we need to be wary of his positivity and naivety. Rachel Weisz as Clare is ultimately supportive of her doomed husband, but it is apparent she has many reservations.

While there is clearly some appeal to Crowhurst’s story, the film has failed to translate this to the audience. There are apparently multiple films and documentaries made about the man and his hopeless mission, so there must be some romantic draw to his adventurousness and spirit. But The Mercy just seems so pointless. The doomed nature of Donald’s pursuits is so evident, that any reason for celebrating them is lost on this viewer. The adventurousness and spirit which must be captivating the various filmmakers telling his story has not translated here.

The Mercy is in cinemas from 8th March through Studiocanal.