Translating Pierre Lemaitre’s epic, Prix Goncourt winning novel, Au revoir là–haut (See You Up There), to the screen is no easy feat. Though the many twisting and twirling threads start to slip away from actor–director Albert Dupontel towards the end, he still offers up a lavish spectacle that mixes melodrama, satire, tragedy, irreverence and dark, surreal humour with strong performances and a particular visual flourish.

The story, set in Paris in the aftermath of the First World War, is told in flashback by everyman Albert Maillard (Dupontel) after he’s picked up by the gendarmes in Morocco. Maillard recounts his experiences as a rank-and-file soldier in the trenches, forced to go over the top by his villainous captain Pradelle (Laurent Lafitte) after hostilities had officially been suspended. The charge, much like the war itself, is futile and leads to the almost live burial of Maillard and the disfigurement of his trenchmate, and near-death saviour, Édouard (Nahuel Pérez Biscayart). 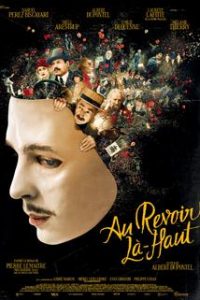 Indebted to Édouard, Maillard helps him swap his identity with a similarly named, but deceased, comrade and together they move back to Paris. There they try to put themselves and their lives back together after the different ways the war has broken them. Maillard scratches together a living and stoops low to supply his friend with his morphine dependence. Édouard, a talented artist who signed up to fight to antagonise his father, refuses to leave their bohemian lodgings, and lives behind – and through – elaborate masks that he creates. There he hatches a plan to make a new life by selling phoney war monuments. Coincidentally it brings them back into the orbit of Édouard’s menacing banker father (Niels Arestrup) and Pardelle, who’s involved in his own bit of war profiteering.

Dupontel delights in soaring, gliding and swooping through Pierre Queffelean’s excellently recreated Parisian sets. They pop with colour and texture thanks to cinematographer Vincent Matthias’work, which recreates the look of the early days of colour photography. An opening battle sequence – which features a particularly stunning shot – is deftly constructed, but Dupontel also shows his skill in his simpler shot choices. And it’s not just behind the camera that Dupontel does well. He also shows some very good comedic skills and is smart enough to surround himself with a more talented cast. They mostly make up for the shallow depth of characterisation that can happen when turning a brick of a novel into a sub two hour film. Lafitte is dashingly dastardly and Biscayart fantastically emotive, despite acting for the majority of the film with his face covered. His eyes convey much and he physically changes to match the mask he’s wearing. Those masks are perhaps the film’s greatest achievement, exquisitely constructed by Mimi Lempicka and magically conveying the different parts and feelings of Édouard’s life.

The arthouse sensibilities mixed with commercial appeal, the visual impact, strong performances and heart make up for the slightly unusual tone and sometimes weak script of See You Up There, a film for those looking for something different from their cinema.

See You Up There screens as part of the Alliance Francaise French Film Festival from 28th February to 27th March.

Written By
David Nagle
More from David Nagle
Yesterday isn’t a film to overthink. Don't get bogged down in the...
Read More