Who doesn’t enjoy a good game night? There’s drinks, nibbles, good company, and some fierce competition. And best of all – it’s cheaper than going out. Still, it usually isn’t exciting enough to take up a whole film, unless there’s a bit of a twist. Thankfully, directors John Francis Daley (who you may remember as young dweeb, Sam, from the short-lived but excellent Freaks and Geeks) and Jonathan Goldstein  offer up just that in Game Night.

Super competitive pair Max (Jason Bateman) and Annie (Rachel McAdams) meet at a pub trivia competition, fall in love, get married, and are now hoping to have a baby. But Max’s sperm are stressed, and all signs point to the imminent arrival of his older brother, Brooks (Kyle Chandler) as the source. Turning up at their regular Friday game night, he offers to host the next one, promising it will be one to remember.

The gang arrive at Brooks’ pad the following week, and discover that one of them will be ‘taken’ and it will be a race to see which pair will find them first. The prize: the keys to Brooks’ Corvette Stingray – the car of Max’s dreams. IT IS ON.

Joining Max and Annie are childhood sweethearts, Kevin (Lamorne Morris) and Michelle (Kylie Bunbury) who are loved up until Michelle reveals that she slept with a celebrity when she and Kevin were on a break. Completing the friendship circle is Ryan (Billy Magnussen), the hot dummy, who for once brings a date to game night who isn’t a total bimbo. But Sarah (Sharon Horgan) is at pains to stress it’s most certainly not a date. 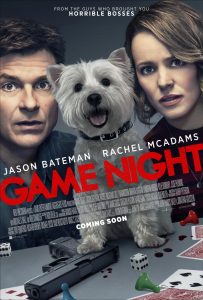 When Brooks gets taken by thugs, each pair are keen to win the game, unaware that the apparently staged kidnapping was in fact quite real. They dick around for a while, having a good laugh while they kick the unconscious FBI agent, wave around what they assume are fake guns, etc. It’s surprisingly fun to watch. It’s not too long though until they discover that Brooks is caught up in something sinister, and then it’s time for them to save the day, find an egg, and stop a plane. So just your usual Friday night.

Mark Perez, whose resume consists of a few unnotable films, delivers an enjoyable screenplay. The story is decent – there’s a bit of heart thrown in there without things ever getting too soppy, and a good amount of laughs. It’s not uproarious, but evokes more than enough giggles to make it a worthwhile watch. There are multiple twists which can often be a risk, but they work just right here. Stay for the closing credits too.

The whole cast are spot on with their comic timing, with special mention going to Jesse Plemons as Max and Annie’s creepy cop neighbour, Gary. He clearly wants an invite to game night but is routinely excluded on account of being hella weird. It’s surprising that Plemons has mostly done dramatic roles prior to this one, because he seems right at home in comedy.

There are a few camera tricks that give the illusion that we are indeed watching an actual board game play out and there’s a special quality to a film that appeals to our fondness for games. If you’ve ever felt a bit lame participating in Charades or Scrabble, take heart that even someone as hot as Rachel McAdams gets into it, and that it’s usually not such a matter of life and death. Now pass the snacks.

Game Night is in cinemas from 22nd February through Roadshow Films.