One of the true auteurs of cinema, Michael Haneke, returns to the screen with his dark comedy/family drama Happy End. The film is a convoluted tale of a bourgeois family set in Calais, a northern French town, infamous for its disparate social strata and the high amount of refugees and migrants. The extended family, headed by aging patriarch George Laurent (Jean-Louis Trintignant once more out of retirement for Haneke) have their own issues. Each member is too preoccupied by the skeletons in their closets to really focus on the who and what is happening around them.

It’s fair to say the film is a reaction by Haneke to the current global political turmoil. Set in another tone the family wouldn’t be too dissimilar from the Bluths of Arrested Development. The adult children of George are Anne (the sublime Isabelle Huppert) and Thomas (Mathieu Kassovitz). Thomas’ ex wife has slipped into a medical coma after being secretly poisoned by young teenage daughter Eve, who must now live with her dad and new wife Anais. Anne has her own problems with her young adult son Pierre. They both struggle with alcohol and Anne is finding it difficult preparing Pierre to take over as director of the family construction business she herself inherited from George. Pierre has a case of early 20s ‘what does it all meanism’. Thrown into this turbulent mix is Toby Jones as Lawrence, English insurance broker, and partner of Anne, in a role that is superfluous to a film that is confusing enough. 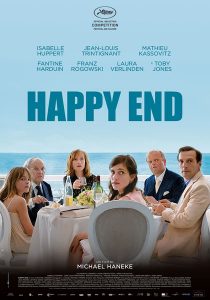 This is perhaps Haneke’s least engaging work; with such an extended ensemble cast we only ever come to know most characters in snapshots through relationships with each other. There is no main character to frame events with, which frustratingly results in even less to anchor the viewer to what is happening on screen. However, it could be a deliberate attempt by the filmmaker to add to the themes of chaos and disorder. There is a voyeuristic element to the film, which avoids closeups and frequently uses devices such as filming through non traditional lenses such as an app on Eve’s phone. This further heightens the emotional disattachment we as viewers feel for the characters.

Despite the confusing and distancing nature of the piece, it would be untrue to label the film unsuccessful, or unworthy of viewing. What Haneke is aiming for here is nothing short of the absolute brilliance audiences have come to expect of the two time winning Palme d’Or director. When such an ambitious attempt falters, even slightly, it’s easy to highlight the small missteps rather than speak to the brilliance behind the work.

Underscoring the irony of the film is that there is in fact no happy end for any of the characters. The theme of suicide* is touched upon more than once. Early in the film George drives head first into a tree, confining him to a wheel chair. In a sombre moment he confides to his granddaughter, after a suicide attempt on her life, of his increasing dispassion for living since smothering his wife (who suffered from Alzheimer’s). Trintignant’s character in Haneke’s prior film Amour went through a strikingly similar event. The fourth wall break and the act presented through such a different context is a jarring moment within the film. Some will appreciate it, others will find themselves taken out of the moment.

The skeletons of the rest of the family reveal themselves throughout the course of the film. In the tone of this black comedy/drama nothing really changes. Anne’s son Pierre seems to be the most connected to the reality outside the family but overdoes it with hyperbole, calling the maids slaves at dinner parties and bringing refugees to elite dinner functions. The strong political nature of the film underscores the narcissistic characters and relationships behind it. It isn’t Haneke’s best work, but considering where that benchmark is, it isn’t too much of a negative criticism.

Happy End is in cinemas from 8th February through Transmission Films.