As the opening titles tell us: Los Angeles is the bank robbery capital of the world. On average one bank is robbed every forty eight minutes as this large and diverse city bears the brunt of American arms manufacturing mixed with late-stage capitalism. This is the world that first time director Christian Gudegast, himself a native of the City of Angels has plunged into, with the cops, the robbers and the thin line that separates them.

After a very well executed opening sequence when a band of robbers with a military level efficiency highjack and steal an armoured truck we’re introduced to our two competing teams. In the red corner is the bank robbing team led by Pablo Schreiber, a cohort of highly trained ex-soldier types that includes such luminaries as O’Shea Jackson Jr. (son of Ice Cube) and 50 Cent. In the blue corner are the cops led by the rugged and unruly detective Nick played by the rugged and unruly Gerard Butler, or to be specific: they’re an elite team from the County Sheriff Deputies out to catch Schreiber’s team through any means necessary. 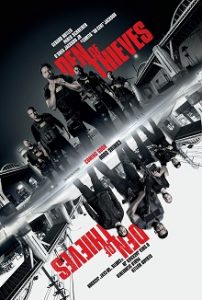 If that description sounds a lot like Heat, that’s for a very good reason: Den of Thieves is pretty much a giant love letter to Michael Mann’s 1995 masterpiece, to the point of almost directly ripping it off. Gudegast’s films isn’t without it’s own merit but it’s impossible not to see this as a filmmaking trying his hand at a genre that has already been mastered. The goal seems to just wear all these inspirations on the film’s sleeve and just play the whole thing so straight faced that it gets away with it, which for the most part, it does.

Butler, in one of his strongest performances in a while, does what he does best: plays a hard drinking, trigger happy, chain smoking tough cop. He’s a lose cannon with a distaste for authority who doesn’t play by the rules but gets results! Basically: a man with cliches instead of legs. Forever with a cigarette between his lips and constantly wearing his leather jacket, Butler manages to somehow make this character work even though he comes across like something an incredible earnest writer came up with to parody this archetype.

In addition to directing Gudegast also wrote the script, which explains a lot. Somewhere in this labyrinth story is a knockout 100 minute action film but as it stands this is a two and a half hour plod that should have cut out several subplots, like the needless inclusion of Butler’s divorce which only highlights just how poorly served the actresses are. The inconsistent acting is noticeable as well. Butler and Schreiber make for a great ‘two sides of the same coin’ pairing but this is offset by the really awkward presence of 50 Cent, who I’m sure is a nice person, but really needs to stick to rapping.

Den of Thieves sets out to be a hard hitting heist film and largely succeeds. There are a lot of very good action beats, including the most nail biting traffic jam since Sicario, and the whole film builds to an absolutely killer denouement but this isn’t enough to plaster over the overly indulgent screenplay and the needless padded runtime. Worth seeing if you’re in the mood for some very macho action and an unapologetic ode to the great films of the blockbuster heist era.

Den of Thieves is in Australian cinemas from 1 February through Roadshow Films.

Written By
Simon Storey
More from Simon Storey
When one of the finest actors of his generation leads in a...
Read More